A Look Back: The Life of Daniel F. Ford
Chapter 8: Everyday Life at my Age

I combed through my personal archives to get a sense of the person I was in order to understand the person I am. I unearthed an autobiography I was assigned to write in the 8th grade. For the next several weeks, I’ll be publishing each chapter of the book.

I have but one thing to say about life: it’s not perfect. As I said before, life is one obstacle after another. In this chapter, I’ll tell you a little about life at my age.

The first thing I’m going to talk about is the many conflicts that invade my life everyday. One of them is girls (editorial note: nothing like unburdening your 14-year-old soul to your middle school English teacher). Some of them keep asking me out no matter how many times I say no. Then they get mad at me and try to blame me for everything that goes on in their lives (editorial note: if you haven’t stopped laughing yet, it’s okay, neither have I).

And along come the family conflicts. Every family has these conflicts and mine is no exception. Some of these conflicts occur with my younger brother. At one point, I was doing all the chores and he was doing nothing. Thankfully, that problem has been solved. Also, we would be playing a game and he’d lose. He would then start pouting or crying and I would get in trouble! Does that sound fair? I don’t think so. Another major conflict in my life is my bedtime (editorial note: I agree, this ranks no where near child poverty or homelessness). My bedtime is 8:30 p.m. even on the weekends. I am in the process of working this out with my mother.

I am totally the opposite of all my friends. In the 1990s, anything that is on MTV is cool, but I stick to VH1 (editorial note: if this sentence doesn’t define my level of cool, I don’t know what does). Most of the guys have either a bowl cut or a skateboard—although I’m not sure what a skateboard is). I usually have a bowl cut (editorial note: I have yet to destroy all photo evidence of this era, but I’m working on it). The music of the 1990s is rap and rock, but I listen to country music.

Despite being different from the “in crowd,” I enjoy many things that those kids like. I enjoy adventure movies like Independence Day. But unlike them, I don’t consider anything “out.” I find everything in life to be interesting and cool (editorial note: that’s still my motto). However, I will try to tell you about some of the things that my friends find “in.” Some like baggy pants and big shirts. I’m not sure what’s “in” with girls, but I’m guessing that smiley faces on shirts is cool. As I said, I’m not sure, because I’m not a girl (editorial note: I’m sure I felt the need to clear that up after the VH1 and bowl cut comments).

Now, on to school life. I can sum it all up in one word: boring! No, I’m just kidding. In fact, another reason that I am different from my friends is that I love school. Call me crazy, but that’s just the kind of person I am (editorial note: I am technically still in school and working on my thesis on the Korean War).

Anyway, here’s a look at a typical school day. I walk to school and then wait for the bell to ring. After the bell, I put my stuff in my locker and go to my homeroom. After homeroom, I go to first period, which is science, then to reading and English. After lunch, I go to math and social studies. I then go to my flex period and then go home. The only thing I dislike about school is math because I have trouble doing problems. School is very important to me because I want to become a big success and make lots of money.

As far as the weekend goes, I have no complaints (editorial note: a nation breathes easy). On Fridays, we usually watch a movie and pig out on Pringles. On Saturdays, we just hang around unless my mother wants to go shopping or something. On Sundays, we go to breakfast, go to the grocery store, and then go to church. After that we have the rest of the day to do anything we want.

I thought I had lost a bunch of old writing files during one of my apartment moves in New York City, but they ended up being in one of my storage trunks back home in Bristol, Conn.

In the mess of old drafts of Sid Sanford Lives, press releases from my time with the Sanford Mainers, and old love notes—how great was it to get a note back in the day?—I found a journal I kept during the sixth grade.

I found an entry that detailed the happiest day of my life, and happily set out to craft this blog post based on it. However, I also let one of my coworkers read it. She found it amusing, but was practically in tears after perusing some of the subsequent entries.

Since I’m always up for poking fun at myself, here is the happiest day of my life and six other entries I hope you get a kick out of. 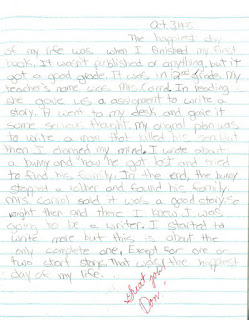 The happiest day of my life was when I finished my first book. It wasn’t published or anything, but it got a good grade. It was in second grade. My teacher’s name was Mrs. Carroll. In reading class, she gave us an assignment to write a story.

I went to my desk and gave it some serious thought. My original plan was to write about a man that killed his son, but I changed my mind. I wrote about a bunny rabbit and how he got lost and his family. In the end, the bunny stopped a robber and found his family (editorial note: If I wrote either story today, I would have been thrown into therapy immediately and my parents would have been sent to jail).

Mrs. Carroll said it was a good story. So right then and there I knew I was going to be a writer. I started to write more, but this is about the only complete one. Except for one or two short stories.

That was the happiest day of my life.

I have a good sense of humor (editorial note: No you don’t).

I wouldn’t win Comedian of the Year or anything, but I’m funny (editorial note: no you aren’t).

I think that Tim Allen is funny. He tells good jokes and is always screwing up on his show.

I think the song my classmate Alex came up with was pretty funny. It was taken from the song “Don’t Go Chasing Waterfalls” by TLC, but he changed the lyrics to “don’t go chasing molecules.” I think my friend Justin is hilarious. He tells great jokes with funny expressions.

If I were five years older, I would get my license to drive. I would buy a Stringray Corvette. It would be black with a red stripe. I would stay up late and watch television. I would apply for my first job. I have a lot of time to think about it though (editorial note: much of this never happened in 2000).

I have to say that if I had the chance to be someone else, I would not be anyone but myself. Seriously, I would be myself, because I like my life the way it is. I don’t want to change it. I have good grades, good parents, and a great family. So I would never change my life (editorial note: one of my coworkers after reading this said, “Aw, you were so sweet.” The other was ready to say, “You were full of yourself even then,” but I beat her to it).

My fictional classmate’s name is Edwin. He is in the top group. He is only 9-years-old because he was skipped a few grades. He has perfect health, except his teeth are a little crooked and he is near-sighted so he has to wear glasses. He has many friends even though he is only 9-years-old. His first day many kids made fun of him because of his age, but now he is liked by many kids (editorial note: that sound you hear is my coworker laughing up a lung. She found this hilarious and was brought to tears).

Ten things I’d like to do as an adult:

Let’s see where I am, shall we?

One time I felt out of the group was in fifth grade. I liked this girl and asked her to give me a chance as her boyfriend. She screamed, ran away, and started crying. From that point on, people were acting different toward me. So that is when I felt out of the group (editorial note: She didn’t have to be so mean about it…sniff…).
Posted by Daniel Ford at 5:02 PM 1 comment:
Email ThisBlogThis!Share to TwitterShare to FacebookShare to Pinterest
Labels: Bristol, Connecticut, Edgewood Elementary School, Family, reading, writing
Newer Posts Older Posts Home
Subscribe to: Posts (Atom)