A Look Back: The Life of Daniel F. Ford
Chapter 6: Special Times

I combed through my personal archives to get a sense of the person I was in order to understand the person I am. I unearthed an autobiography I was assigned to write in the 8th grade. For the next several weeks, I’ll be publishing each chapter of the book.
Though I had both good and bad times growing up, the good and special times always came through in the end. The special times stuck out in my mind like a sore thumb. There are times in my life I will never forget, like the one’s I’m going to describe in this chapter. I never really believed in the cliché “if life gives you lemons, make lemonade.” Maybe that’s because I thought life didn’t give me any lemons. As I look back, I realize that life gave me plenty of lemons, but I never took full advantage of them. 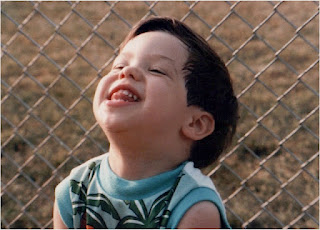 I’ll start off with talking about some of my family’s treasured traditions. On Thanksgiving, my family travels to Southington, Conn., to spend the holiday with my Tante Peewee (editorial note: I could explain what that hell that means, but I don’t feel like it) and Uncle Skip. Going there in the cold of November is like going to The Bahamas. This is because they have a coal stove. My uncle usually says grace and we then devour the great food my aunt has prepared. Sometimes my aunt and uncle pull out old home movies. The movies contained footage of my mother when she was my age!

While I’m on the subject of my aunt, I might as well cover it all. Every Independence Day, she hosts a birthday party for my cousin Eric. Let me tell you, you will never leave there feeling hungry. There is so much food—ranging from chicken to marshmallow salad (editorial note: every year it is made, and every year it is ignored). Needless to say, my aunt plays a big role in our family.

Another family tradition is Christmas Eve. Every Christmas Eve, we invite our aunts, uncles, grandparents, and friends over to our house to have a merry little Christmas. There’s one Christmas I will never forget. Everyone was there. We were finishing up munching on snacks, and were now ready to open presents. There was only one problem. My Dad decided to show up late (editorial note: World’s best son, right here. The man was only getting home late from working hard to put food on the table). Finally, I got fed up (editorial note: sorry Pop) and started asking people to give Christmas messages into my Talkboy. I was in the kitchen at the time. My Mom said if my Dad did not arrive, we would start. Around 8:27, I wandered into the living room. The front door gave me a soft jab in the head. I glanced at who had opened the door. It was none other than my father (editorial note: maybe the worst told story about a spoiled kid not getting to open his presents in the history of mankind).

Now after all this (editorial note: I think I’m referring to my family enduring my storytelling here), don’t you think a family needs a vacation? We don’t go on many, but I love the ones we do go on. Let me explain one of my favorite vacations.

First, there’s a long 12-hour drive to get to our destination, Frenchville, Maine. We first go to Long Lake Motor Inn in St. Agatha, to drop off our luggage and then we head out to my Tante Valeda’s house. She is the most interesting person I know. She makes a good living making dolls in her shed. We have four of them already!

Across the street lives my mother’s favorite cousin Ivan. He works at a paper mill in Canada and is also a volunteer firefighter. Ivan has two—oh, wait, now it’s three—adorable children who my Mom is just crazy about. My Mom’s other cousins live in New Brunswick, Canada. I am good friends with their youngest daughter Tina. Nothing—that I know of—on this trip is not fun. Well, I take that back. My first trip to Maine was to attend my Mémère’s funeral. I was too young at the time to understand it all, but as I look back it was probably my worst trip to Maine.

Now what else makes life worthwhile than gifts (editorial note: spoken like a true 14-year-old). I like to give and receive gifts—sometimes I like to give gifts more than I like to receive them. Probably the best gift I have ever received as a Roger Rabbit stuffed animal. I got him when I was about two-years-old, and still have him to this day. Whenever I would sleep over my cousin Judy’s house, I would bring him. I wouldn’t go to sleep unless she performed fake surgery on him. The best gift I ever gave was a clay owl. I would give anything to see my Mom’s face when I gave it to her. It was perfect—well, minus his broken wing). He is proudly displayed on my mantle.

Another thing that goes with gifts is birthdays. I will never forget my fifth birthday. It was the first and last kid party I ever had. All my friends from the first grade were there. We completely demolished my family’s study. Toys were everywhere. We played hot potato and other games. There are pictures of me and each friend and the gift they got me. After the party was over, my older brother Tom had to pick up the mess. I helped, sort of.

While we’re on the topic of my favorite holidays, I might as well cover them all. My favorite Halloweens—and one of my last (editorial note: no idea what this means)—was two years ago. I happened to be a black ninja that year. My Dad took me and my little brother Patrick to a few houses on our block, and then drove us to my Aunt Cathy’s house. We collected candy from her, and sat down to visit for a while. My cousin Judy was nice enough to take us around her block. The first house we went to was her next-door neighbor Mrs. Peterson who made all the kids who came through pose for pictures. It was my best Halloween ever, and one of my last (editorial note: still no idea what the hell I’m talking about).

Now, what do you think the average age for a normal kid to learn how to ride a bike? Wouldn’t you say between the ages of six and seven? As you can plainly see from the previous chapters, I was not a normal child. I learned how to ride bike between the ages of eight and nine! I learned with no training wheels (editorial note: because that in no way would have been MORE embarrassing). At first I was a little shaky, but by nightfall I was a pro.

There were a lot of people who were special to me while growing up. The person I’m going to describe here is someone who will always be very special to me. This is not the first—or the last—time that she’s been mentioned. The person I am describing is my cousin Judy. There are so many reasons why that I would need a whole book to get them all down. I might as well start from the beginning.

After my Grandmother Cassidy died, Judy had to start babysitting us fulltime—usually this meant after school every day and during the summer. She’s more than just a cousin or a babysitter though. Judy is my friend, my best friend. She’s probably my only true friend in the world. I could tell her anything about anything and she would not tell a living soul—unless I give her permission.

During the summer, she had to watch us almost 24/7. We would arrive at her house around 8:30 a.m. and leave around 5:30–6 p.m. During the day we did many things. At 1 p.m., we watched Days of our Lives. There are so many other things that would take up a whole book.

A week before school started one year, she set up a tent in her backyard and invited me and my brother Patrick to camp out. Her next-door neighbor Stacey also joined us. We had a blast. We played games like 3’s Wild and Trivial Pursuit. We invented “Cuban weed.” We were playing Outburst and the topic was Cuba. Stacey was trying to give us hints, and one of them was pretending she was smoking a cigar. Judy didn’t think it was a cigarette, and yelled out “weed!” We all started to laugh and that’s how Cuban weed was born.

That’s just one example of how great my cousin’s personality is. Judy is probably what makes my life worth living. Since it was the last year she babysat us fulltime, leaving the house that was my second home that last day of summer was difficult. Somehow, I lived through it and checked off another obstacle that I had overcome.