Smells of the Game & Rouglas Odor

Sure, there are those smells that every sports writer likes to wax poetic about. Everybody loves the smell of an old leather glove pressed up against their nose, overpriced hot dogs, frothy beer spilling everywhere and freshly cut green grass.

However, you won't be able to spin the odors we'll be discussing today into eloquent hyperbole.

I cracked into my softball bag for the first time in a couple months and it was, ahem, ripe. There weren’t any dirty clothes or ancient socks in a hidden nook; it was just the lost vapors of last summer’s sweat and B.O. that had stubbornly clung to the insides before being zipped up for winter. I guess a pair of well worn cleats didn’t help matters much.

However instead of alerting the authorities of an impending biohazard, I breathed in deeply. I felt alive! I could have thrown on a pair of gym shorts and played 18 straight innings of softball right then and there (had it not been pouring outside with a biting wind). It was a great "bad" smell.

There is nothing quite like the aroma of baseball or softball sweat. It doesn’t smell like other sweat. All athletes experience extreme heat and the sweat pours out of them. But for the most part they’re constantly moving around. With baseball, you could be standing in the same spot in the outfield for hours, just baking. There have been times in the dead of summer that I have been left for dead in left field with the sun torturing every drop of liquid out of my body. I sweat from everywhere. The water cannot escape my body fast enough. 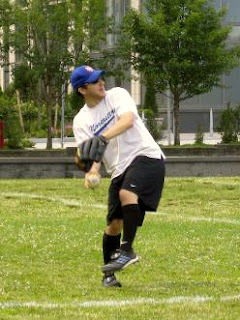 So, all of this man sweat has to go somewhere. It does. It finds a home in the fabric of my dri-fit jersey and shorts. Of course I’m also wearing black socks that go up to my knees so by the end of a marathon softball day, I could ring them out and fill a medium sized swimming pool that no one would want to cannonball into.

To try to combat this prodigious sweating, I drink as much water and Gatorade as humanly possible so I have something for the sun to suck out of me every time I trudge back out onto the field. I repeat this for six to seven innings, my insides gradually burning while I do all I can not to collapse in a puddle of my own sweat.

I’ve always wondered what it would be like if I didn’t have anything to drink. If I tried to man it out in a battle against the sun, who would win? I envision the heat and sun would mockingly laugh at me before liquefying my insides, sucking them out through my nose and turning me into dust.

By the end of the day, I smell like a combination of the East River, rancid sewer water, burning flesh and just a hint of lemon-lime (depending on the flavor of Gatorade I’ve consumed that particular afternoon). By now, I’m sure you can’t imagine anything that could make this situation worse. But I can.

Stepping into the air conditioned train is almost better than the shower that awaits me at home. The main difference is that people are staring at me, and not because they know all about the game winning hit I smacked. It’s because I’m the reason they’ve forgotten all about the homeless guy at the other end of the train (who is making plans to hop off at the next station because even he can’t stand the stench). The best part is that all the smells I’ve accumulated are congealing on my body and clothes. Even after a thorough washing of both, the memory of the stank never really goes away. And that’s not exactly unfavorable (unless you make your significant other uncontrollably dry heave to the point where they need immediate medical attention).

Continuing today’s theme of smelly Sunday, I was able to unearth some fine examples of baseball’s fragrant past. According to baseball-reference.com, Rouglas Odor played 8 seasons in the minor leagues from 1988-1995. He played in 618 games and had a career average of .248. His best season came in 1990 playing for the Cleveland Indians Advanced A Affiliate. He hit .261 with 116 hits, 21 doubles and a slugging percentage of .326. He did find some success playing independent ball in 1995, batting .289 for three teams. He was a shortstop/second baseman that made 65 errors in his career, good for a .965 fielding percentage.

There was one major leaguer that exemplified my odorous ode to baseball. He is Frank Funk, pitcher for the Cleveland Indians and Milwaukee Braves in his brief four year career from 1960-1963. He was actually a pretty dependable relief pitcher for the Indians in 1960. He pitched in close to 100 innings and won and saved 11 games. His E.R.A. was 3.31, which isn’t that bad pitching in a league with Mickey Mantle, Roger Maris, et. al. He struck out 64 batters that year and finished with a career total of 150. His last season with the Braves he went 3-3, with an E.R.A. of 2.68 in 25 games.

Opening Week usually provides some scenarios that make baseball fans and commentators scratch their heads. I mean, how can you honestly have a conversation with someone about the fact that the Baltimore Orioles and Toronto Blue Jays are sitting on top of the AL East with only one loss each. Both teams are expected to be awesomely bad, but there they are, ahead of the Rays, Red Sox and Yankees, three teams expected to be the best in the entire league. Speaking of the Red Sox, they bring back Jason Varitek after he has a mess of a season offensively and what’s the first thing he does? He hits a homerun on Opening Day. He hit another homerun two days later and compared to last year is hitting a respectable .267. The Cleveland Indians are 0-5 after yet another off season of speculating that this would be the year that they put everything together and made another run to the World Series. The Royals, who have been a trendy pick to be this year’s Rays, have seven players in their lineup hitting below .215.

The reason I’m bringing all this up is that baseball, more than any other sport, needs at least a month or two to sort everything out. You can’t possibly judge who is really good and who is really bad. The Indians could run off 10+ wins in a row, the Orioles could lose 10+ in a row and we’re right back where we started from.

Opening Week is like taking a big gulp of air when you’ve been submerged underwater. Everything seems possible and you’re just grateful that you’re still alive. After awhile, you forget to remind yourself to breathe and your reason and common sense comes back. We’ll see where we are come June. My apologies to the Washington Nationals fans. Your luck isn't going to get any better this year, enjoy your five wins (and if you root for the Texas Rangers, consider yourself cursed).
Posted by Daniel Ford at 10:00 AM
Email ThisBlogThis!Share to TwitterShare to FacebookShare to Pinterest
Labels: Boston Red Sox, Cleveland Indians, East River, Milwaukee Braves, New York Yankees, Rouglas OdorChester Sweatt, Tampay Bay Rays, Toronto Blue Jays