The Yankees are up three games to zero in a best of seven against the Atlanta Braves.

It’s late in the game and the Yankees are down by a run.

After a base hit, the Yankees’ big slugger comes up with a chance to do some real damage. He’s one homerun away from setting an all-time record and putting his team up in the final inning. He calmly touches the plate with the end of his bat and eases into his stance. He’s ready for anything.

The Braves’ pitcher takes his time on the pitching rubber. He’s not sure what to throw. He finally makes up his mind and starts his delivery. His mechanics are perfect. He plants his foot and releases the ball exactly where he wants to.

The white ball slices through the crisp fall air. Everything is silent as it makes its way toward home plate.

The batter takes a step and starts a mighty swing. His wrists move his bat quickly toward the strike zone. His head is down and he rotates his hips to generate maximum power.

The silence of the moment is broken when the ball connects with the bat. It starts again as the two competitors watch the flight of the ball.

A record breaks and a World Series victory is within reach as the ball hits the top of the outfield fence and goes over. The batter raises his arms as he starts to round the bases. It’s a triumphant moment. He leaps up and lets out a yell.

The pitcher does not take any of this well. It appears like he’s lost the game and feels the weight of the world on his shoulders. He can’t help but cry.

Then, he gets angry as he watches the batter celebrating around the base paths. He grips the only weapon he has, his glove. He rears back his arm and lets it fly.

It finds its target, who is stunned as he reaches home plate. Yelling fills the air as the pitcher starts barreling toward the man who’s just humiliated him. The batter puts his hands up defensively. The pitcher swings his fists wildly, but the batter keeps pushing him away before he can make contact.

“Boys!” a scream fills the air. “Get inside right now! You can’t play nice, your season is over!”

The younger brother quickly lands one more punch before running into his house crying even harder. The older brother picks up the yellow Wiffle bat that he just hit his 200th homerun of the season with, gives one more look around the backyard and also heads inside.

World Series over. Season over.

Years later, the older brother is trying to survive the Florida heat while his college team fights off elimination. He cringes as a third strike sails by their last hope. He watches as his hated rival celebrates on the field.

He eases off the bench and starts going through the motions of getting all of the equipment together. He recognizes the faces on the seniors. It’s the recognition of a last moment. There is no tomorrow and there is no next year.

He stops what he’s doing.

The dugout empties out quickly, like it does after every loss, save for the handful of guys looking at each other not knowing what to say. It’s harder for the men around him; they actually have a uniform and a line in a stat book to walk away from. He just has to hand in a laundry room key.

In the locker room, the coach tells him what their plans are for “getting out of Dodge”. The older brother is half listening, wondering what it’s going to feel like in a day or two waking up and not having to pick up after 25 players and four coaches. The game has been apart of him so long, he wonders what it will be like not to be around it every minute of every day.

He takes a deep breath as he remembers something. His younger brother’s high school season isn’t over yet. His team opens the state tournament two days from now.

There are still games left.

The younger brother gets a hit in his last at-bat.

The game is too far out of reach to matter, but it’s a line shot between the first and second baseman. He rounds first base like he’s been taught all his life. He watches the left fielder come up with the base hit cleanly and throw it in to the shortstop covering second base. He retreats back to first base and waits there until the pitcher is back on the rubber.

He’s erased off the base paths moments later after his teammate hits a groundball to the shortstop. He wipes the dirt off his pants and sprints back to the dugout.

His team can’t rally and the crowd is left stunned by the upset. The older brother watches from the stands as the seniors take a last look around. Some are going off to play college ball and still have games to savor. Others though, like his younger brother, are leaving the game behind for good.

The crowd starts to shuffle out. Some of the players come out of the locker room of the old time ballpark quickly, wanting to get away from the pain of losing right away. The older brother knows that his younger brother won’t be among them. He’s always the last one out and tonight will be no exception.

True to form, the younger brother walks out with the coaches. His faded, sweat-lined blue hat is pushed up on his forehead. Their mother rushes to hug him, despite the fact he’s all dusty.

Two careers began in a backyard not too far away from where they were standing. One brother was able to wear a uniform and captain a team to a state tournament. The other hung on for dear life as the game brought him around the country as a watcher, writer and go-to-guy.

There’s no throwing a glove this time or staging a tantrum. There are only smiles and pats on the back.

The two walk out of the stadium together, arms around each other.

Neither has to look back. 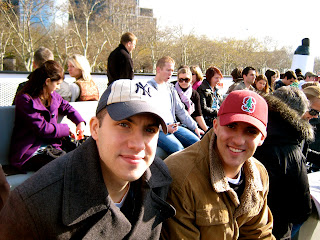 Brothers have long been an intricate part of baseball history. Joe, Vince & Dom DiMaggio ; Cal & Billy Ripkin ; Aaron & Bret Boone ; Felipe, Matty & Jesus Alou and of course, the tres Molina brothers are some of the more well known bands of brothers littered throughout baseball’s past and present. However, I wanted to think outside the box for this week’s player profile. I was not disappointed.

In honor of today’s guest and, well, me, I also discovered the brother duo of Gene and Russ Ford. I sympathize with Gene because he was the older brother, but had to watch his younger brother enjoy the better career. Then again, Gene can also say he played in the major leagues and I can’t (well, he could if he wasn’t dead). Gene pitched in seven games for the Detroit Tigers in 1905 and came away with a 0-1 record with a 5.66 ERA. Russ, on the other hand, pitched seven seasons for mostly the New York Yankees from 1909-1915. He went 22-11 in 1911 with a 2.27 ERA and 158 strikeouts. He finished 18th in the MVP balloting that year according to baseball-reference.com. He ended up just one win shy of 100 career wins with an ERA of 2.59.
Posted by Daniel Ford at 12:00 AM
Email ThisBlogThis!Share to TwitterShare to FacebookShare to Pinterest
Labels: Aaron Boone, Atlanta Braves, Billy Ripken, Bret Boone, Cal Ripken, Dan Brouthers, Dan Ford, Detroit Tigers, Dom DiMaggio, Felipe Alou, Jesus Alou, Joe DiMaggio, Matty Alou, Vince DiMaggio