All the wires were plugged in where they needed to be. The cable box was blinking bright green numbers that made no sense. I double checked the instructions and quickly rearranged the cables to where they actually needed to be.

There were more nonsense blinking and numbers. I unplugged the cable box from the power source and plugged it back in. Different numbers, and even letters, popped up on the display screen. This is around the time I started swearing.

I sat on the couch and waited. I was patient for all of five seconds before I got up and tried everything all over again.

No cable. No baseball.

I had fought my girlfriend to re-up our cable for the start of the 2009 Major League Baseball Season, I had fought the bureaucracy of the Time Warner office and I had fought the rush hour subway crowd on my way home. There was no way I was giving up without watching a baseball game in my own apartment, especially with the Yankees opening up their new palatial stadium.

However, after 15 more minutes of sweat and swearing, give up is exactly what I did. I slumped onto the couch thoroughly exasperated. I fired up Google to call up Time Warner and berate the first real human being I got. I was promptly put on hold, by a machine.

As if scripted, my technology savvy girlfriend arrived home from work and wanted all the attention. I had a sour puss plastered all over my face as the hold music blared in my ear. She started to ask me question after question and in my ensuing tantrum I hung up on Time Warner. I was on my own again, this time with a cranky girlfriend.

I was about to give in, let everything go and give her all the attention she wanted, when out of the corner of my eye, something started to happen.

I shoved her lovingly out of the way and focused all of my attention on the new run of numbers and letters. The television stopped spitting out static and snow and went blue. A countdown began. And then it happened.

I wasted no time in commandeering the remote to frantically search for the Yankees’ flagship station. My eyes widened and my smile returned. There was green grass, brown dirt and bright, white, pinstriped uniforms. Finally, baseball (and a prolonged argument about how to program the remote).

Before we continue, I guess introductions are in order. My name is Daniel Ford and I’ve been a passionate baseball fan all my life. With the help of my family and friends, I will be discussing the game that has been like a religion to me. Each Sunday, I’ll delve into a variety of topics I find interesting about the ins and outs of baseball and the players who have defined it. I must admit I am a die hard Yankees fan, but will do my best to keep my bias and Red Sox hating to a minimum. There will also be a weekly interview series featuring my family, friends and whoever else comes along. I do hope you enjoy.

Words upon words have been dedicated to this week’s Player Spotlight selection, but I couldn’t think of a better example of how my love for baseball started. This player played 2,401 games for storied New York Yankees and was an icon for a generation of young boys, including my father. He is the one, the only, Mickey Mantle.

Besides the unreal numbers he put up in his Triple Crown year of 1956, there are several other stats that jumped out at me from the pages of my Baseball Encyclopedia. He had an on-base percentage of .512 in 1957 and that didn’t even lead the American League! He lost out to Ted Williams who had an on-base percentage of .526. The other stats are his .685 and .605 slugging percentages in 1961 and 1962. From 1960-1962, Mantle whacked 124 homeruns and lead the Yankees to three World Series.

Mantle was also a legendary drinker. It was eventually his undoing, but to his credit, he spent most of the last years of his life telling his fans “don’t be like me”. The Mick died in 1995.

For this inaugural edition of Baseball Sunday, I wanted to get the perspective of someone who saw Mantle play in person. I have long maintained (to the unending criticism from women and mothers everywhere) that baseball is a game best reserved for fathers and sons. It is a game that not only enhances their bond, but in many ways, defines it. I am lucky enough to have a father that created and nurtured a passion for baseball in all three of his sons. I couldn’t think of a better person to interview first. 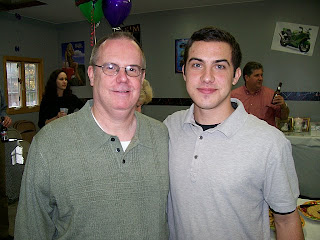 DANIEL: What do you remember most about Mickey Mantle?

DAD: I remember how well he played with bad legs. He would have 3” of tape wrapped around his legs, but he had such speed, could hit for power and could catch up to any ball in outfield. He made it seem like he wasn’t hurt. I saw him play in person a bunch of times. I used to take a field trip with an altar boy club and we’d sit in the bleachers. One year we’d go to Yankee Stadium and the next we’d go to Fenway Park.

DANIEL: Were you one of those kids that emulated Mantle?

DAD: As a left handed hitter, I tried to copy Roger Maris’ swing. Maris had such a fluid swing and I liked the way he cocked his bat above his head. Mantle had such a powerful swing, it was fun to watch.

DANIEL: What did you think of the way he carried himself off the field?

DAD: He was a partier. There are legendary stories of drinking nights with him, Billy Martin and Whitey Ford. It makes what he did on the field even more amazing. Not only was he battling injuries, but he was battling alcohol too. Toward the end of his life, he really made an effort to make people see who wrong he was. He didn’t want people who idolized him thinking that everything he did was right.

DANIEL: You watched three sons play baseball. What do you miss the most?

DAD: Watching you guys play the game. It was my favorite thing to do in the world and I miss it terribly. I was proud of all three of you. I would rearrange everything to watch you guys and that wasn’t always easy. When Tom (my older brother) was playing in the American Legion Tournament in , I had to call in a lot of favors with people at work on top of trying to make that drive pretty much everyday. Those are things you don’t forget though. Even you, with no experience, you went out and played really hard in that park & recreation league. I was proud of you for winning the most improved player award. I think if I had it to do over again, I’d have pushed you more to play Little League and then who knows what you would have done. I was proud of Pat (my younger brother) too when he was the co-captain of his high school team. I just loved watching you guys and being a dad. I miss going and cheering and would kill to watch another game.

DANIEL: Why do you think the game has been so special to our family?

DAD: I think we just have a love for it. I started you guy in it and you really took to it. It’s always been a great diversion in bad times, especially this year with all the economic stuff going on. Tom actually deserves a lot of credit for carrying the torch. He loved the game more than I did after awhile and hooked you guys at an early age. You weren’t that social when you were younger, but he had Pat swinging a bat around the age of three. He worked with you once you got over your shyness. He actually said something to me when Pat started playing to help me be a better Little League parent. He said, ‘don’t coach from the stands, don’t criticize, just cheer’. It’s something I pass on to the guys at work who have kids playing ball right now. It’s just a great game and I just loved watching you guys play it.

I hate making a prediction this early in the season when all I have to go on is a bunch of spring training games. So, I’ll reserve some of my thoughts for a later date. I will say that it is going to be a very interesting season. I don’t see any team that really pops out and looks like it will be a dominate team. I think both the Yankees and Red Sox look great on paper, but have plenty of question marks that make me think the Rays might still be the team to beat in the AL East. I don’t like any of the teams coming out of the NL or AL West, but I think the AL Central could be an interesting division. I would never sleep on the Twins and think the Indians have the pieces to be a really good team. The Phillies are returning 22 of the 25 players from last year’s roster and look like the team to beat in the NL. I think the Mets have a great bullpen, but other than Johan Santana, don’t have an intimidating starting rotation. I look forward to seeing another Mets collapse in late September, this version with the starting pitching sticking the knife of the hearts of Mets fans. I think the Cubs will be good too, but honestly can’t think of another NL team being of any interest.

Well, that’s enough for this week. I hope you enjoyed the inaugural Baseball Sunday and I look forward to hearing your feedback.