“Did you just discover the meaning of your life?”

This question was poised to me by a Writer’s Bone contributor on Friday. This was in response to me saying, “I think I'm here to find cool writers and give them confidence so they can find their voices.”

I majored in modesty at St. John’s University.

But I wasn’t kidding. There’s nothing I love more than editing and working with young writers to get the best out of them. It took me a long time to find my voice and I feel like I have some worthwhile advice to offer the next generation of up-and-comers. I just didn’t have a venue to do it in before recently.

I’ve spent the last couple months building a sound foundation for a podcast with my fantastic partner Sean Tuohy. We got into it to talk about the things we had in common and discuss our approaches to the writing craft—to be huge writer nerds essentially. We thought it would be smart to start a blog along with it to drive traffic to the podcast and give us a place to write about anything we found interesting.

Our earlier posts included our best moments as writers, calling well-known writers assholes in a complimentary way, favorite moments from "The West Wing," and reminiscing about how Nelson DeMille popped our cherries by having Dirk Pitt shoot a guy’s dick off. Sean and I could have kept on that track—and our posts in large part have stayed true to those themes—but our shtick on the blog might have grown to be overkill when combined with our podcast.

Plus, I’ve had this desire to build a website that featured all the creative types I’ve come in contact with over the years. Some of them were still in the writing game, but I know more than a few that were hesitant or scared to write more than just a weekly grocery list. I was also lucky enough to meet a bunch of young writers when I moved to Boston that inspired me to send Sean this email:

“You said something great last night that's been in my head for a little bit. You said something like, "I hate hearing the word no as a writer." I emailed a writer friend earlier that day telling him we want to make Writer's Bone a place where writers don't have to hear the word no. They can let their freak flag fly so to speak. That should be our mission statement. Writers tired of restrictions, limits, and censorship will always have a home with us.”


We both worked full-time, so really it was no brainer to look for content that we didn’t have to think about creating. But it meant more than that to us. I think both of us have struggled at times to accept being a writer and here was a chance for us to ease the suffering of others. Author Rebecca Cantrell, one of our favorite early interviews, also inspired us:

“Writers must suffer for their art. Every time I hear that it drives me crazy. If writing isn’t fun, why do it? I have lots of fun writing and so do most other writers I know. It doesn’t have to be about suffering.”


The future Mrs. Hardball Heart and Sean’s girlfriend started contributing in the beginning and we started collecting thoughts and essays from a wide range of young writers. My girlfriend made a good point early on that we shouldn’t say they were working for us. Every writer essentially has to write for himself or herself, so she made me realize we were writing with each other. We’ve had that mentality ever since.

When we published an essay by a guy I work with ay my day job, I put a $1 bill on his desk and said, “Thanks!” He picked up the dollar, looked at it, and pinned it to his bulletin board. “That’s the first time I’ve ever been published anywhere!” He said. “Thank you!” It was one of the proudest moments of my professional career.

Someone asked me once what I would do if I was handed the keys to an established website and social media following. My answer remains the same. I would blow my brains out from boredom. I’m meant to build things and experiment, not toe the line and not screw up someone else’s brainchild. I’m meant to do what I’m doing with Writer’s Bone.

Now, the best part of my day—other than those moments when I’m in the presence of my spectacular future wife—has become when one of our contributors emails or texts me and says, “Hey, I have this idea…”

I’m bringing all this up because one of those young writers wrote a post (which you can read here) about how she moved on after her laptop and jump drive were stolen—two things that held all of her digital archives. That got me thinking about my own archives and how I’ve made an effort the last couple of years to document mine on this blog.

Below are a few things I found at my parent’s house in Connecticut a couple weeks ago that I want to live in perpetuity in some form or another. After you’re done here, I encourage you to head over to www.writersbone.com and check out our writers who are absolutely killing it right now.

I’m awfully proud of all of them. 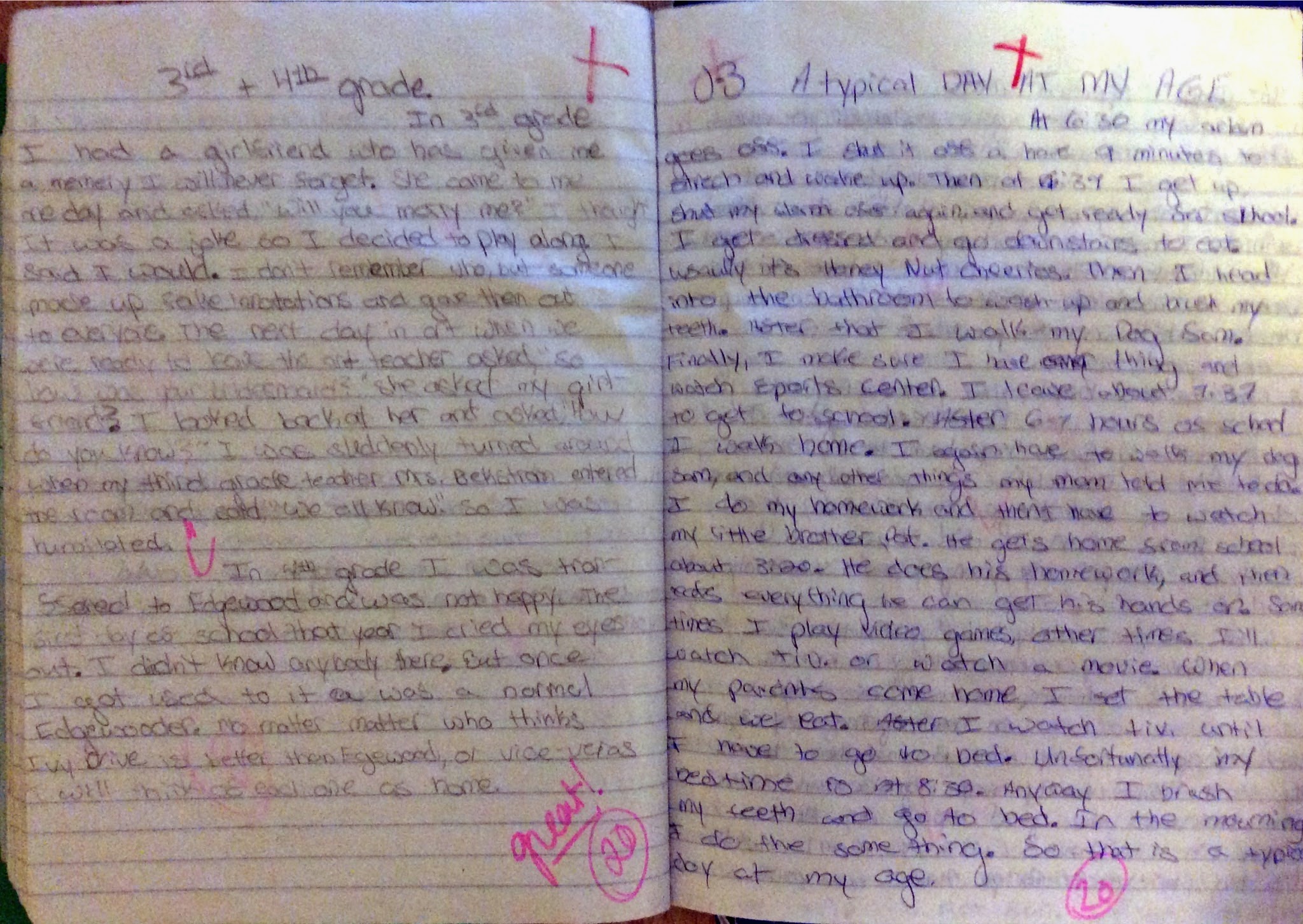 The rough draft of my seventh grade autobiography. My handwriting has not improved (click to enlarge).

I had an illustrator at one point. This is my favorite cover he produced. It also happens to be the only one I still have. 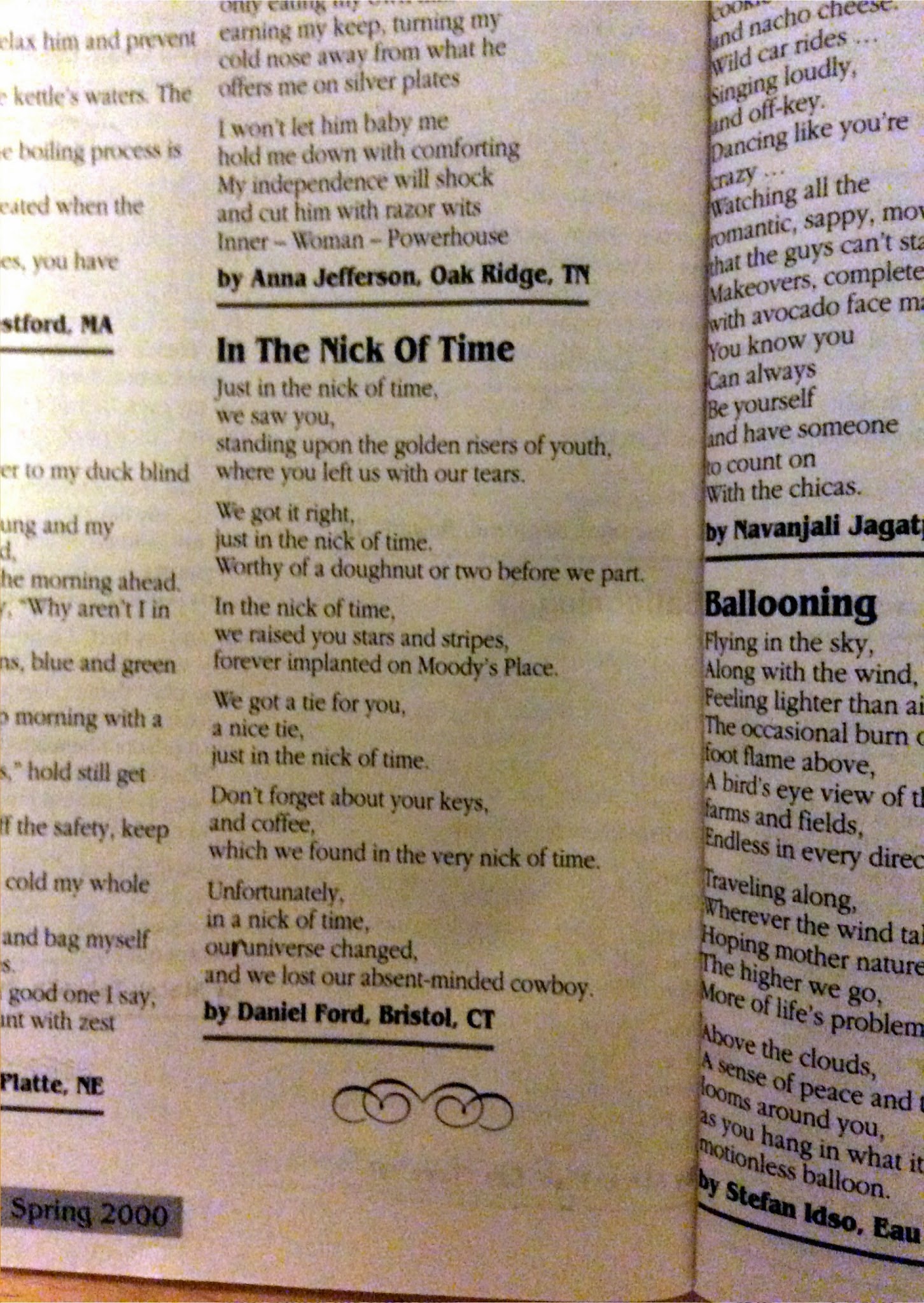 This might have been the first time I was ever published. The poem that Teen Ink ran was one I wrote for one of my high school band director’s who was semi-retiring. 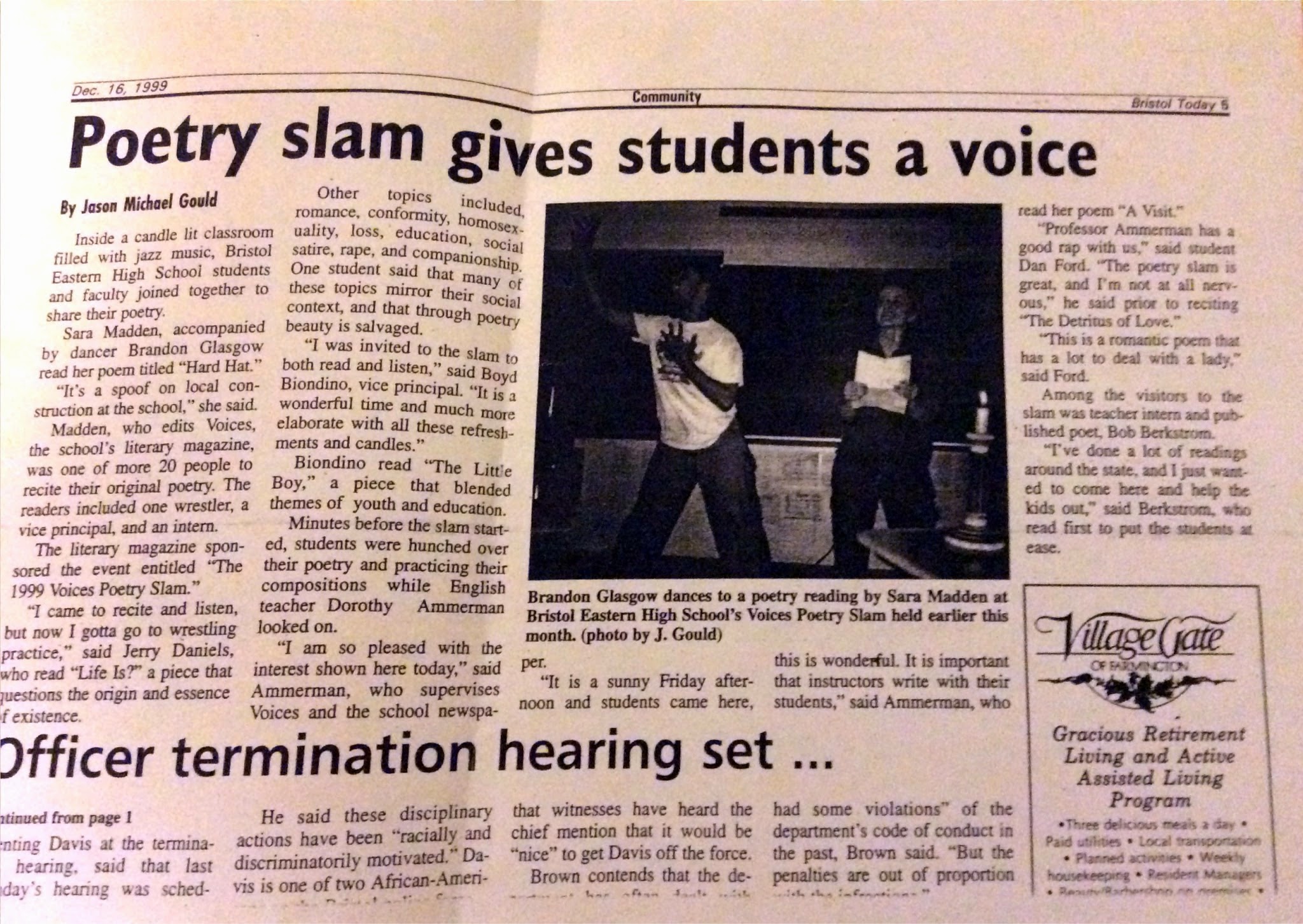 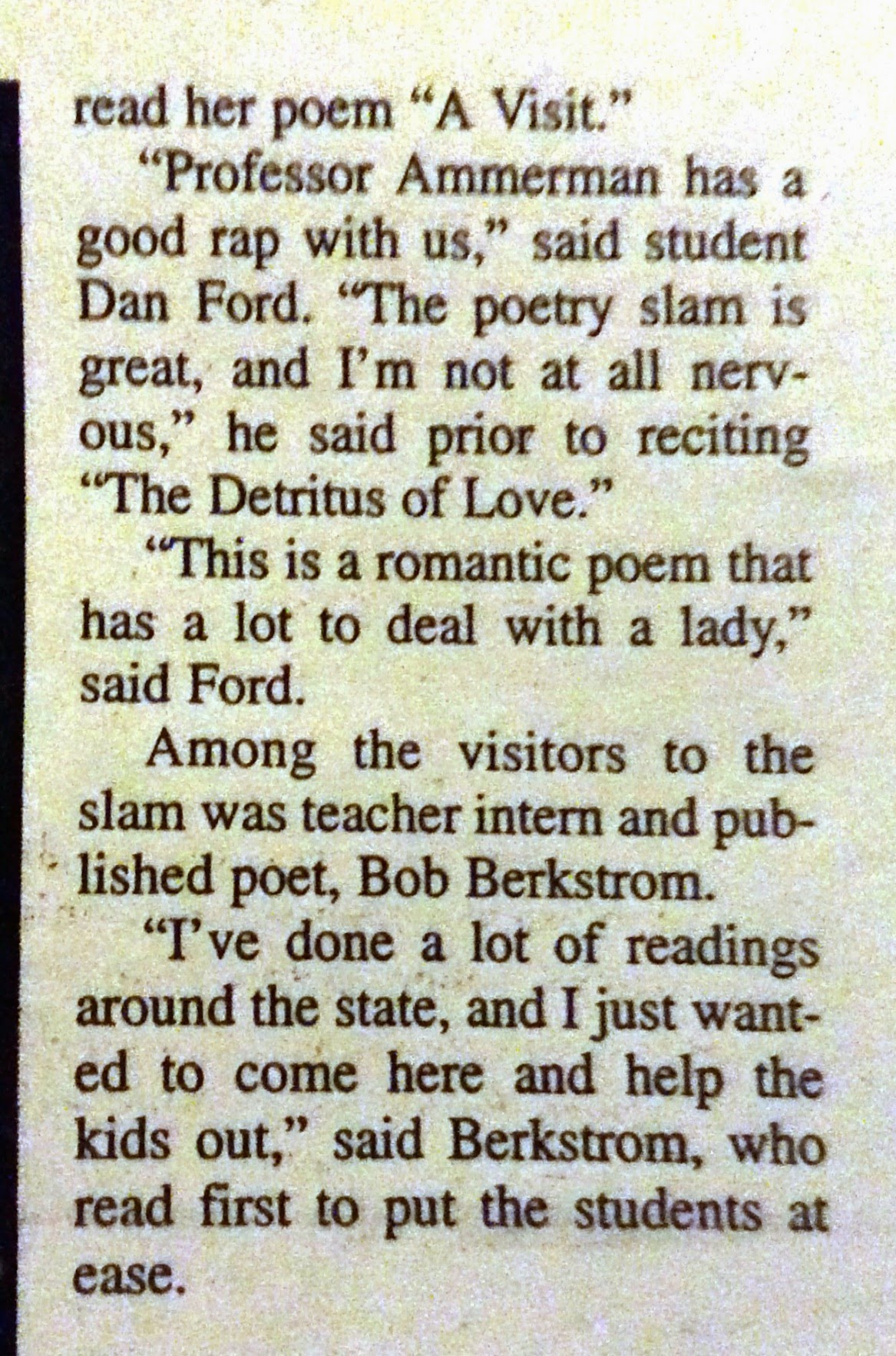 Speaking of poetry, check out the above article that was published in my local newspaper that includes a quote from yours truly. Hey, if you're going to be quoted about your weepy high school poetry, you better make sure it's a good one. 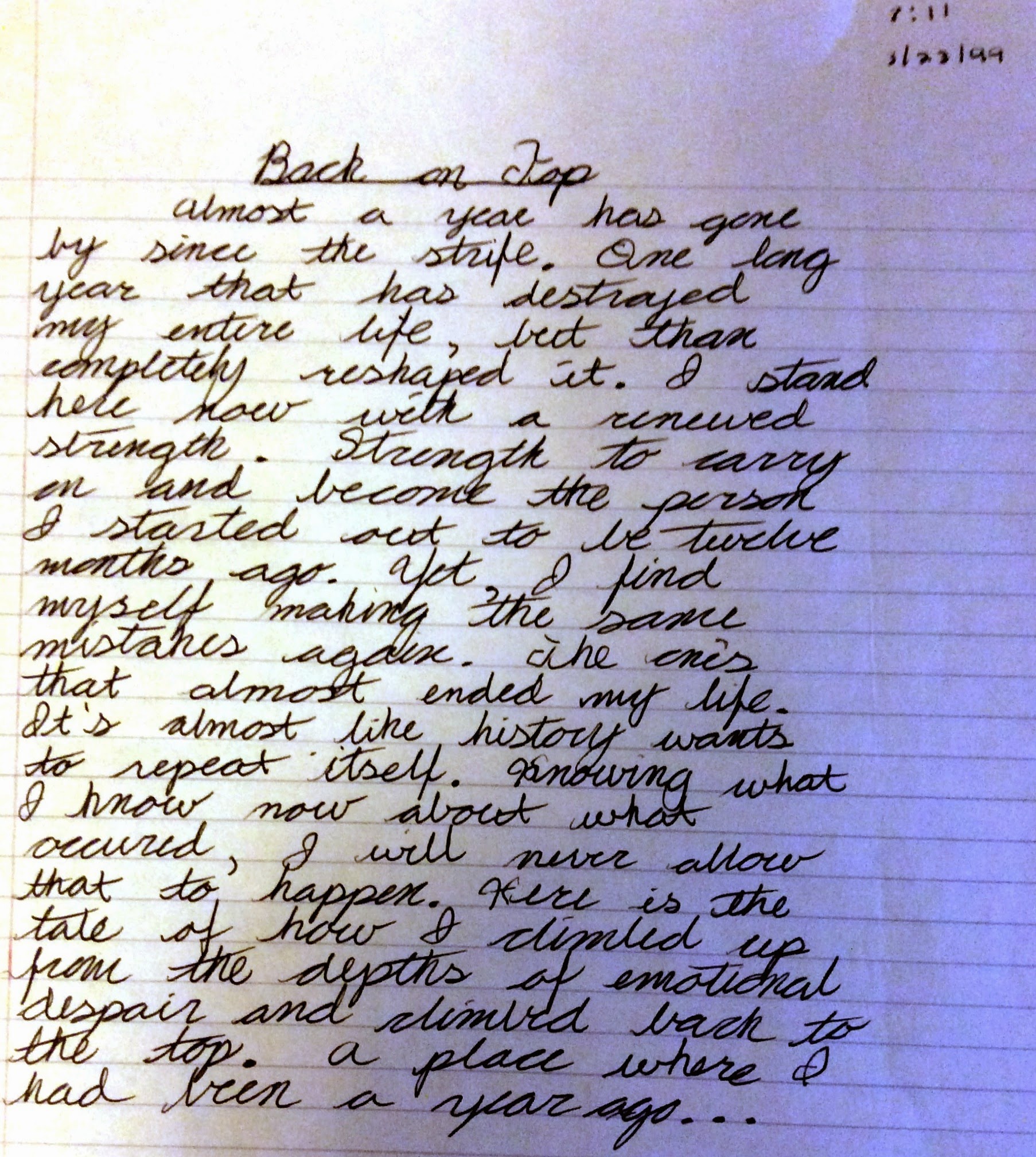 A short story I started in high school. I'll be revisiting this in a future post. 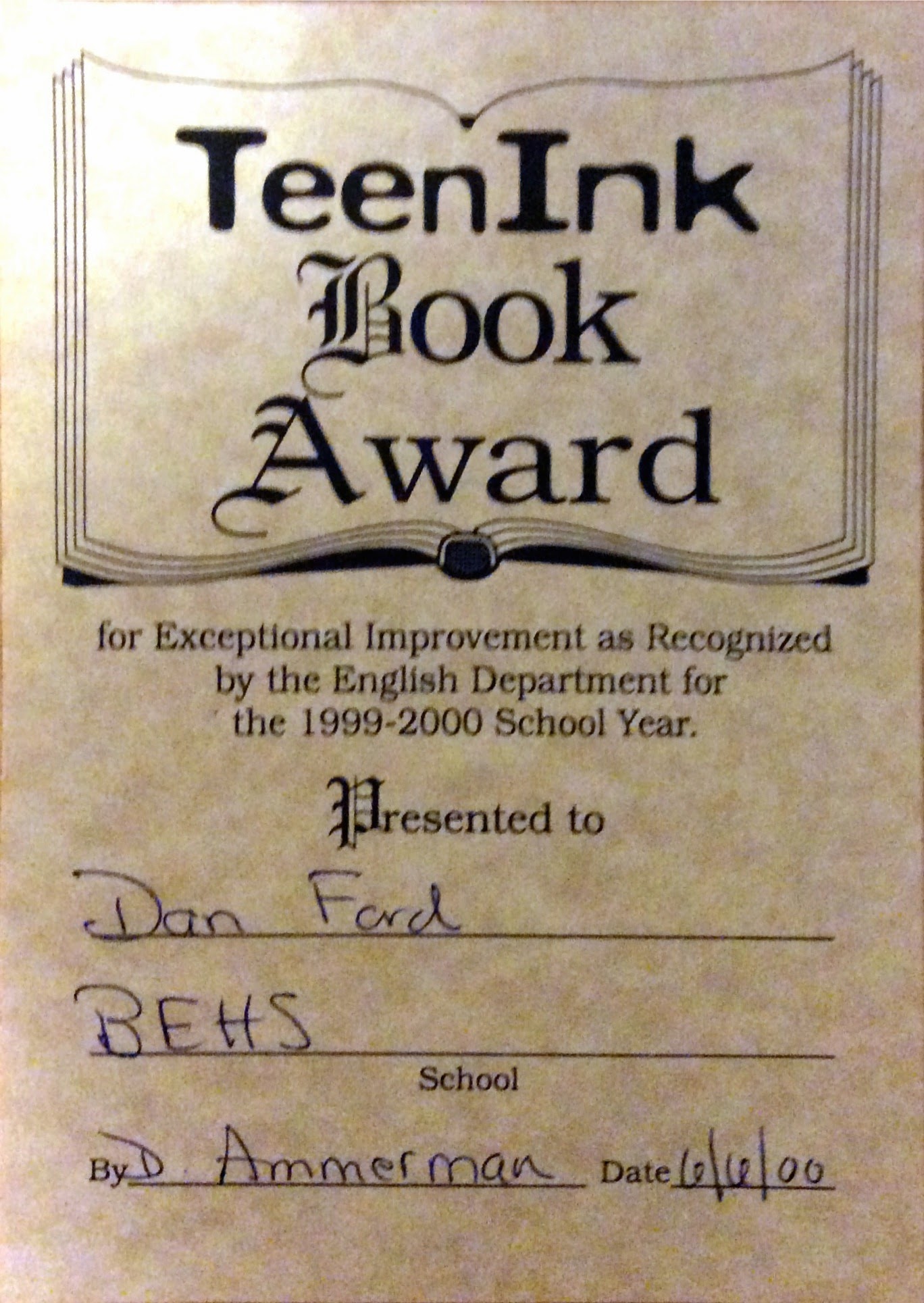 Teen Ink also sponsored one of the awards I received in high school! That should say “badass writer” by the way. They sadly never got around to fixing that typo. 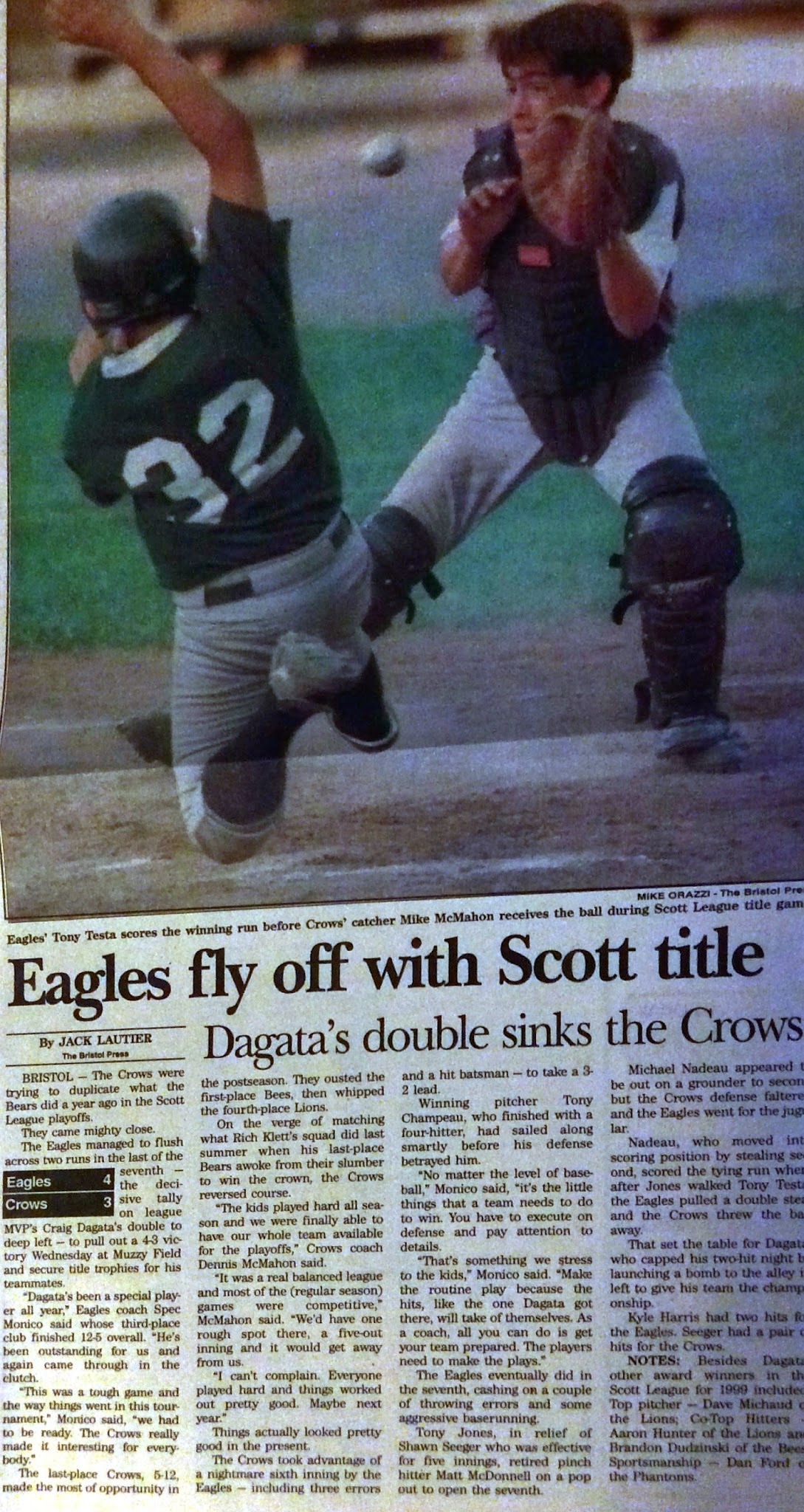 More proof I actually played baseball. That’s not me sliding into home plate or the catcher about to make the tag. I’m mentioned at the very end of the article for winning the league’s most improved player award. 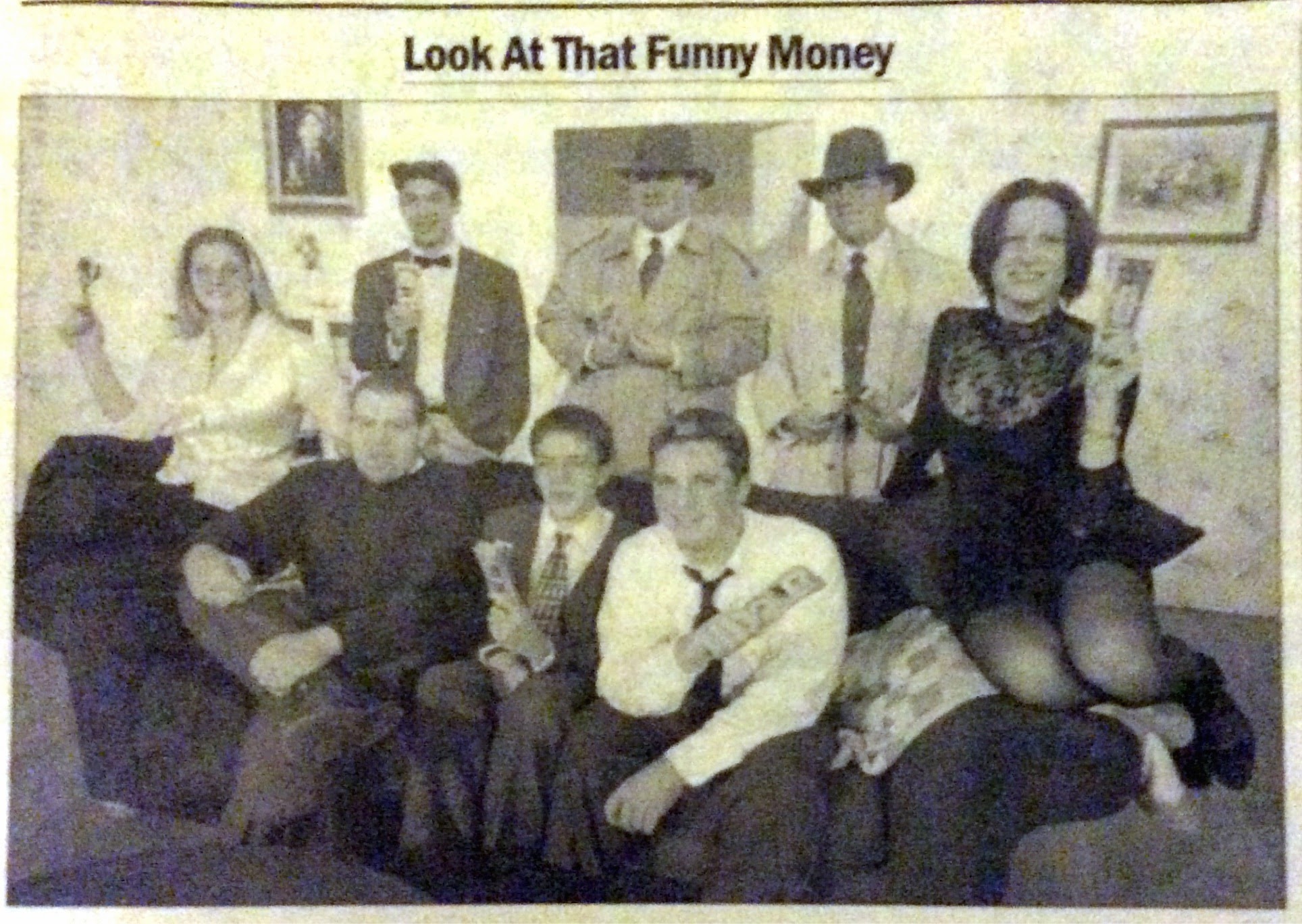 My only other acting gig following my performance in The Wizard of Oz was as a cab driver in a play called “Funny Money.” I got to fire a fake gun (which didn’t work the second night)! 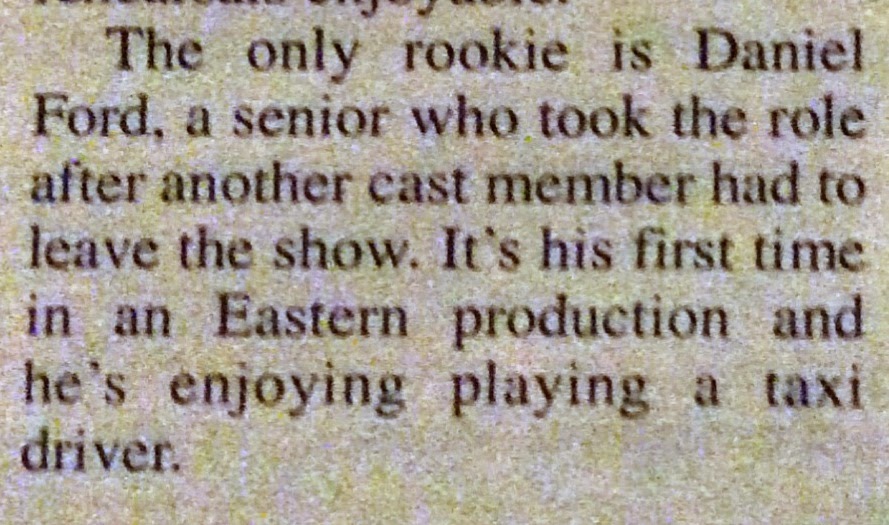 What the local paper had to say about me. 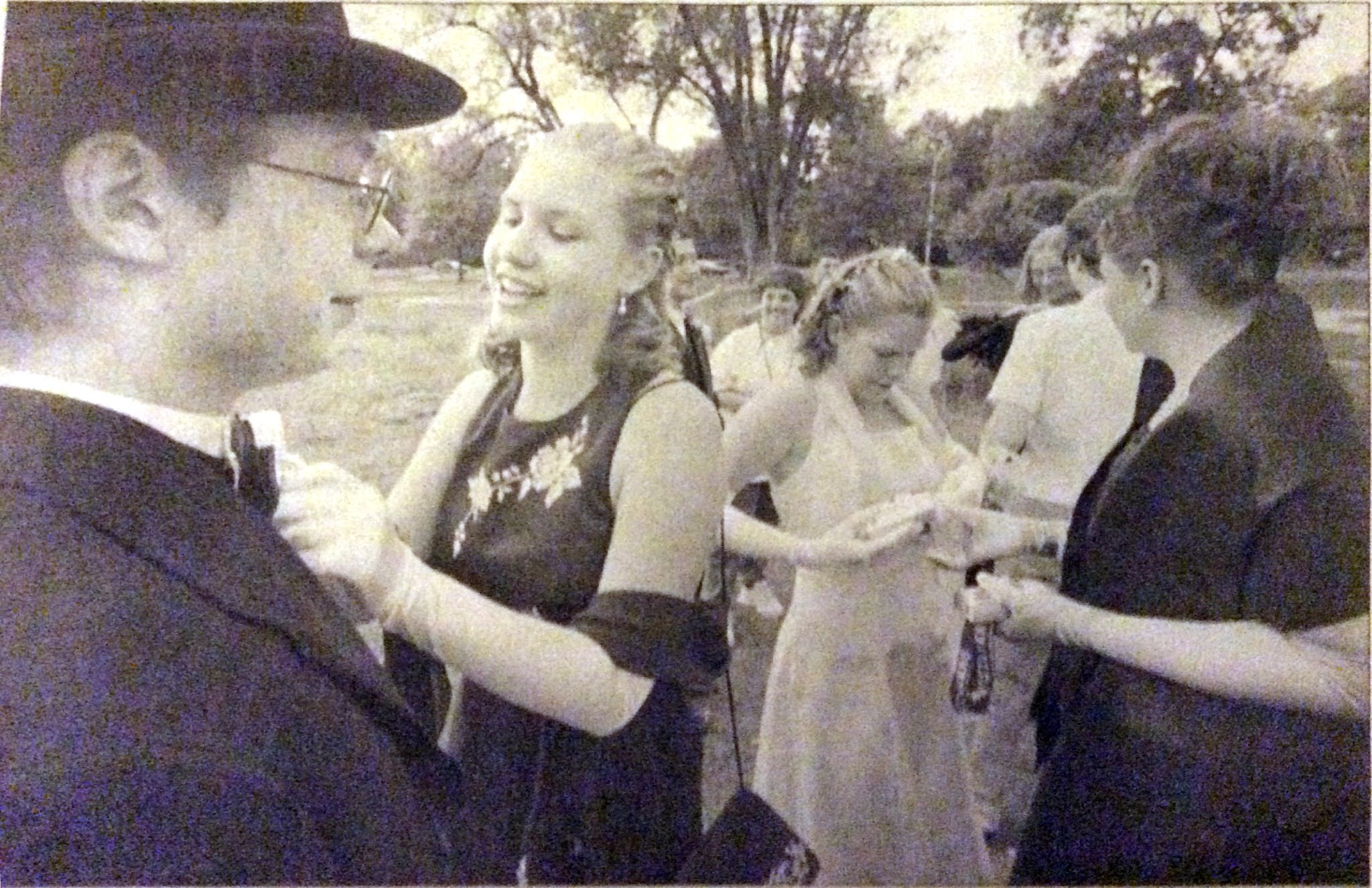 My friend Paul’s top hat was the best thing that ever happened to a lot of lives. The locals only caught a fraction of its majesty. My mom and I are photobombing in the middle. 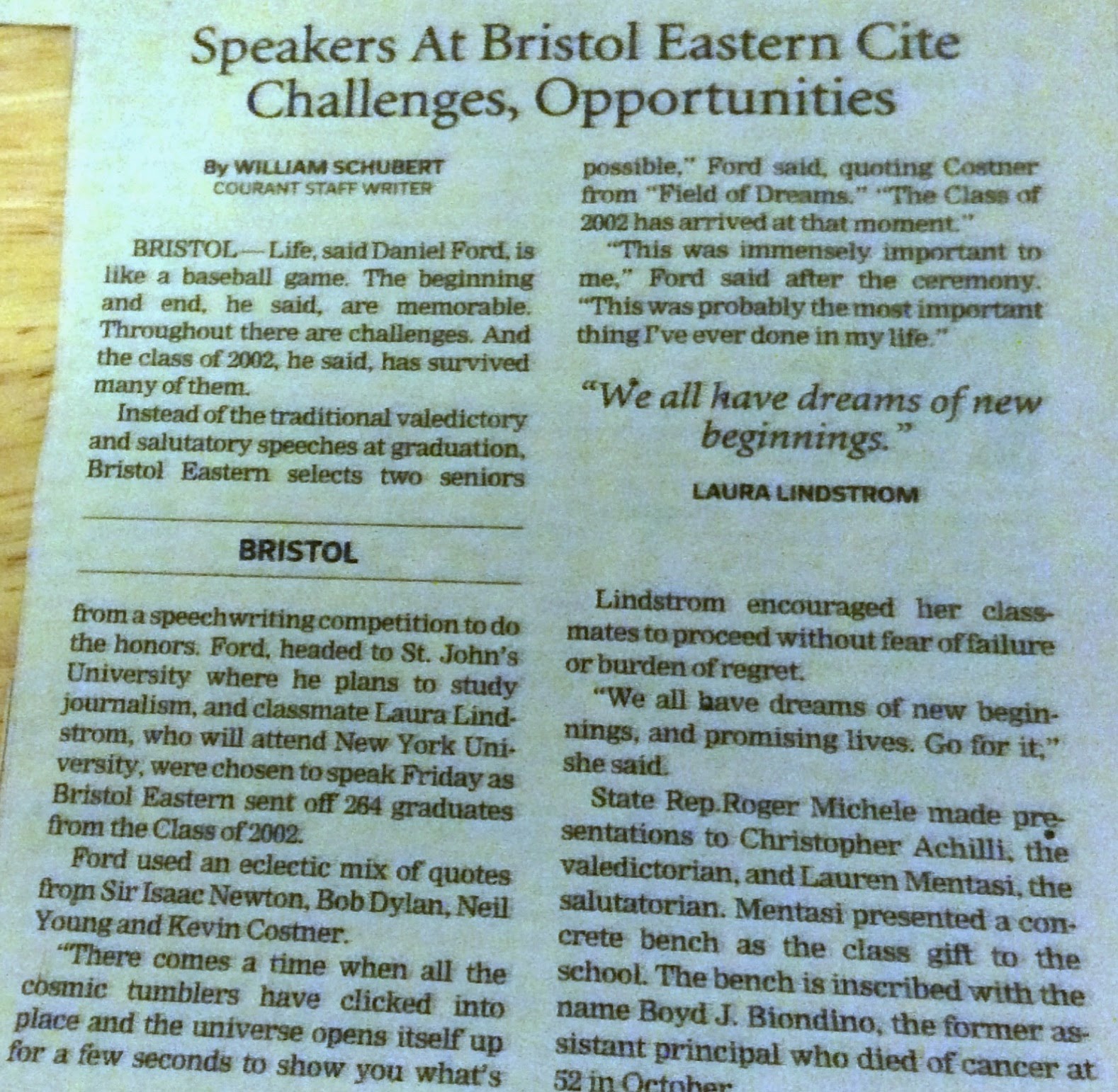 Some local ink about my high school graduation speech. I wasn’t a dramatic quote at all…(click to enlarge) 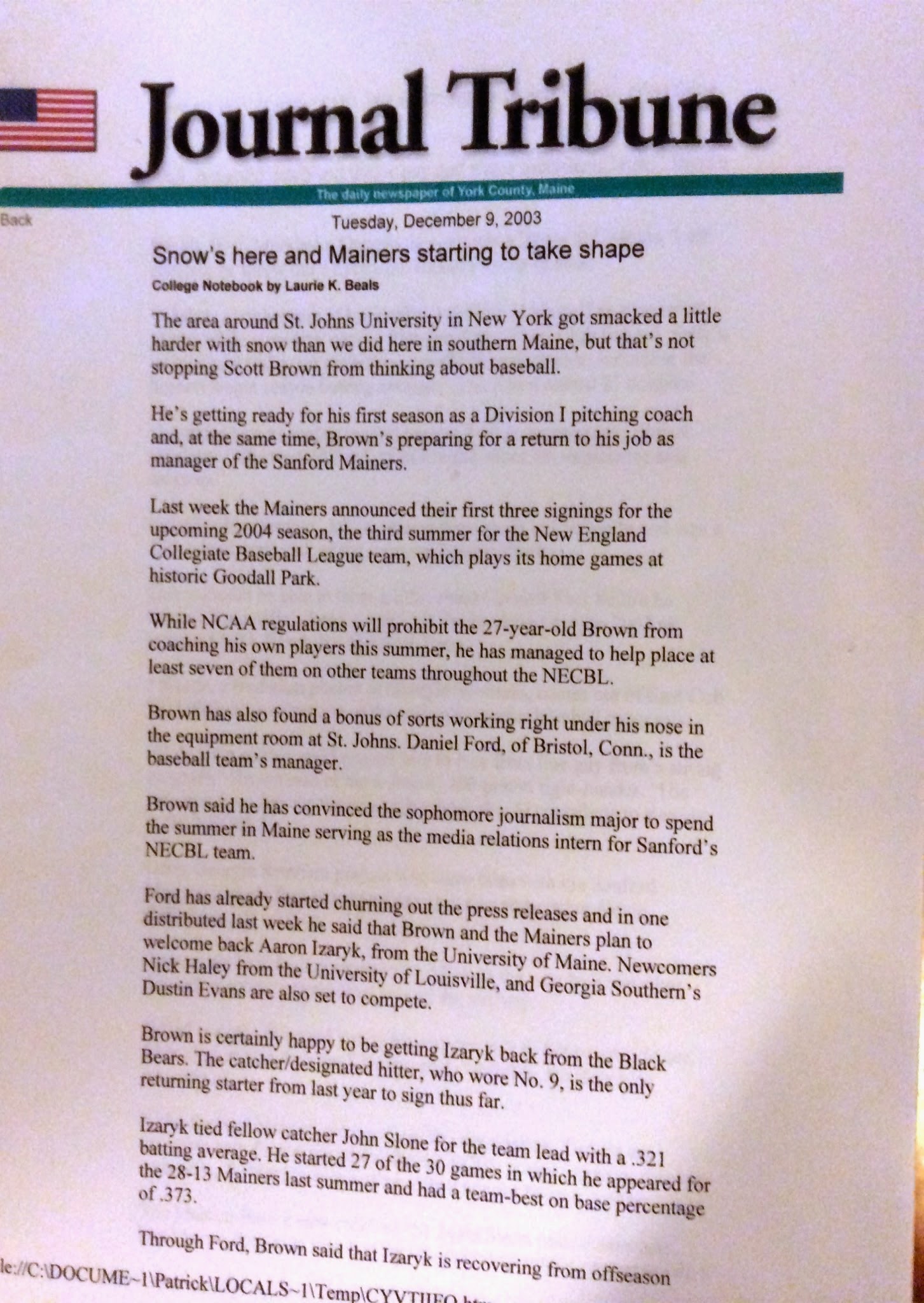 The beginning of my internship with the Sanford Mainers. 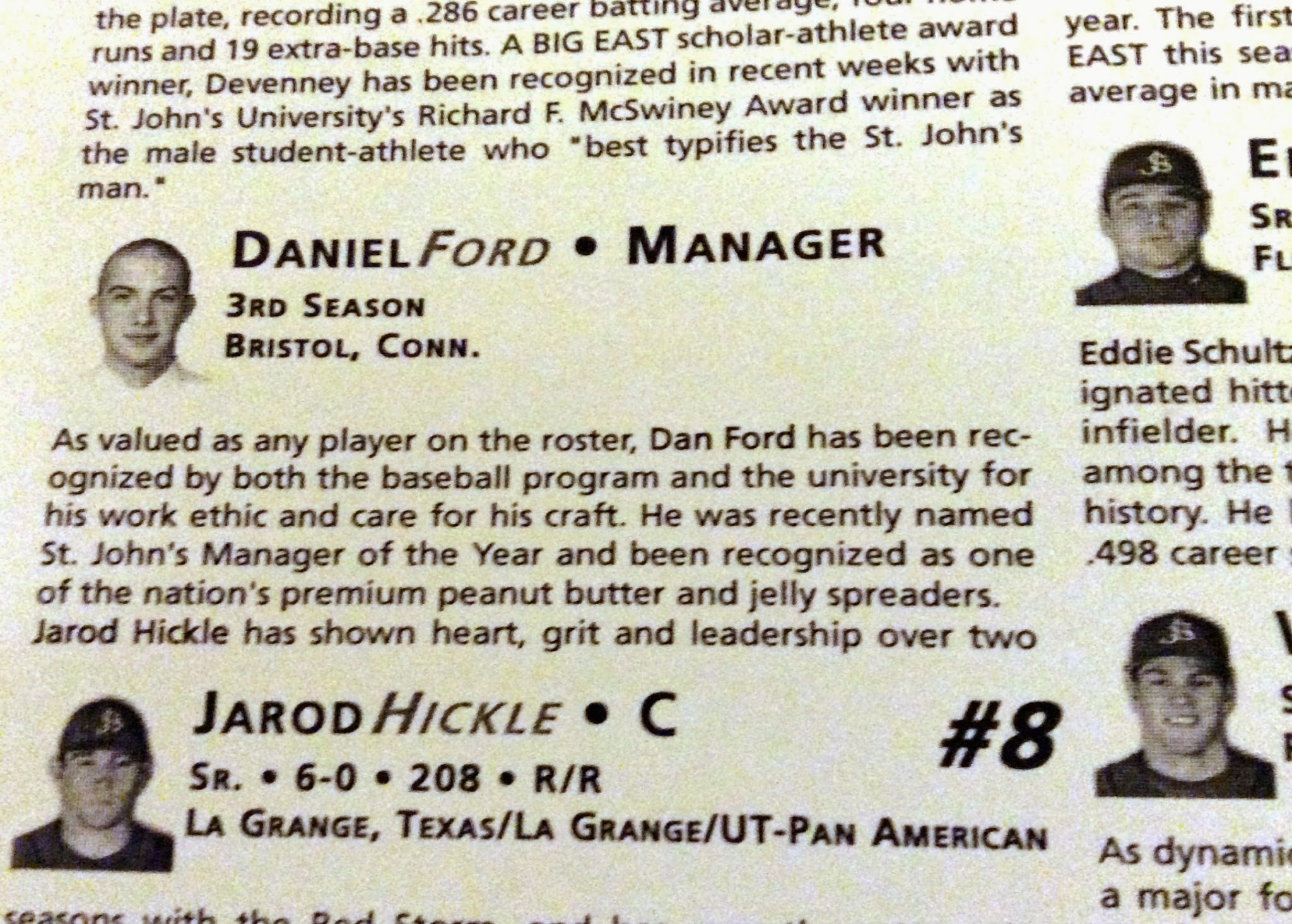 See, I have other skills! 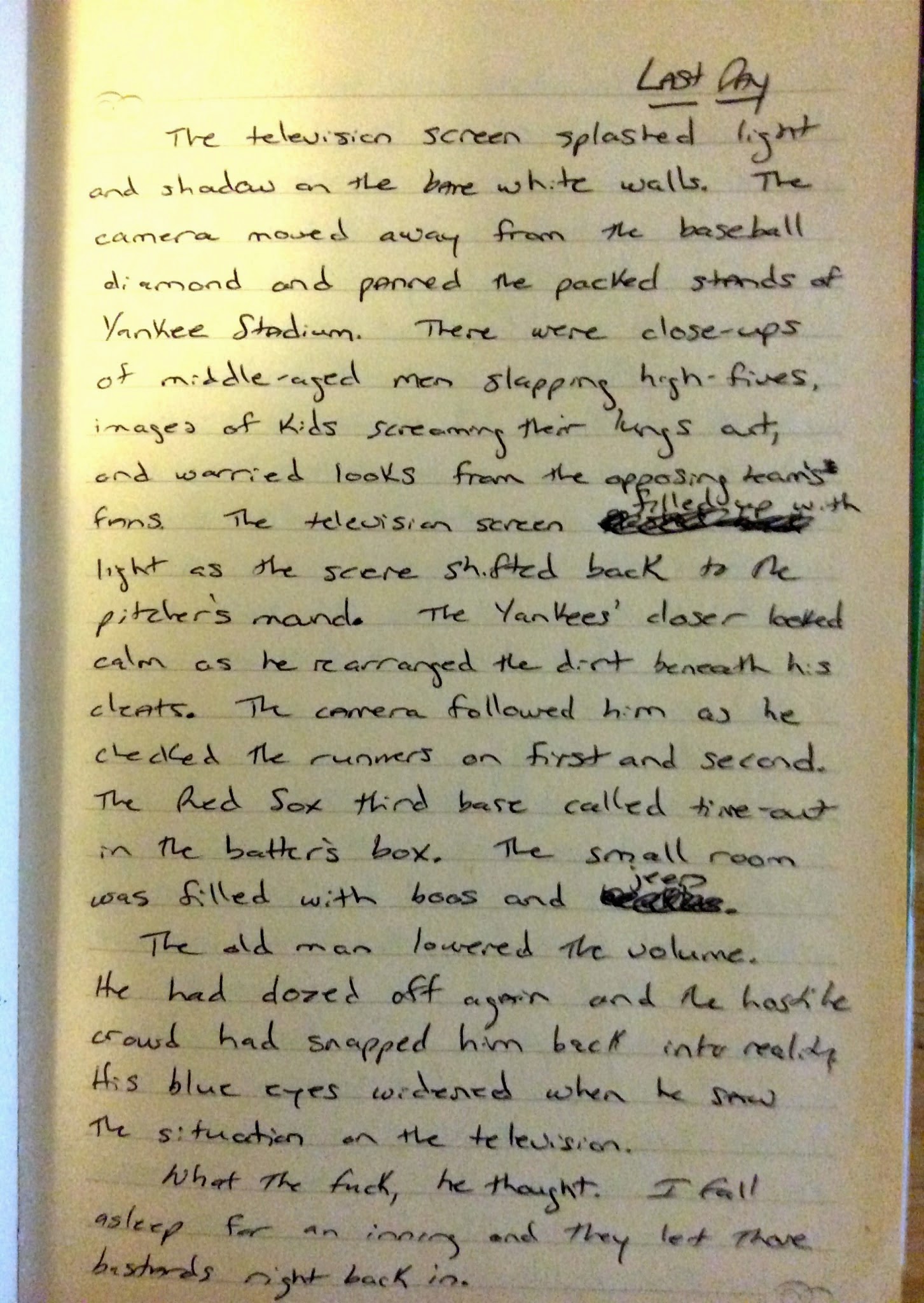