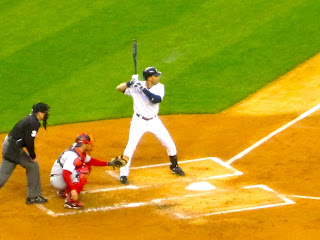 I still remember how good it felt to notch my first base hit.

It was a couple of games into my second season in my hometown’s summer recreational Pony League. Up to that point, I only had strikeouts and two weak ground ball outs to show for all my effort.

I’m pretty sure I made an error in the field the half inning before because I ran in from the outfield angry. I led off the inning and I remember being angry standing in the batter’s box. I angrily lined the first pitch I saw into left field where I saw it drop in front of the outfielder. I stopped being angry when I reached first base.

I remember how good it felt to be standing there. I hadn’t made an out. I hadn’t walked. I had an honest-to-God hit. I didn’t know then that I’d have that feeling only 12 more times.

I have no way of processing how good it would feel to do that 3,000 times.

However, the most important Yankee of my generation is about to find out. As I write this, Derek Jeter is two hits away from 3,000 with three more games before the All-Star break.

Much has been made of Jeter’s decline in recent years. Fine, I get it. As you know by now, I’m a homer for the New York Yankees. I’ve been that way my whole life. I’ve never thought about rooting for another team (except for when I would root for the Mets when they were doing well before I moved to New York and actually met a Mets fan). I could tell you that I’m a Yankees fan because my dad was born in New York and has been a Yankees fan his whole life, but that wouldn’t be telling the whole story. I’m a Yankees fan in large part because of Derek Jeter.

Before 1996, I didn’t follow baseball religiously. I would watch the game with my older brother and my dad, but I had no connection to players like Pat Kelly and Melido Perez. I couldn’t steal Don Mattingly away from my older brother because I was in diapers when Donnie Baseball was tearing up the league during his prime. Besides, I was too young and having too much fun playing Wiffle ball with my younger brother in our backyard. What kid wants to waste three hours watching a bad team when he could be outside arguing with his brother about who is going to be the Yankees that day?

Derek Jeter and the 1996 Yankees turned me into a true baseball junkie. 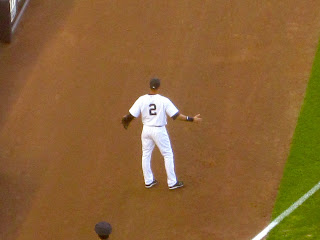 Here’s a player I could connect with. He was young. He wore a single digit number. He played the coolest position on the field. He had an inside out swing that I would grow to emulate. He was fast. He was always smiling. And he loved his parents, who frequently went to the games to see their son play.

I can’t lie—winning the World Series that year helped endear me to Jeter. I vividly remember watching my father’s reaction to Charlie Hayes catching the last out. I think he jumped higher off the couch and cheered louder than either of the two sons he had be his side. I remember watching a smiling Jeter drenched in champagne, smiling broadly, and thinking that anything in this world was possible.

The Yankees kept winning during the late 1990s and my family and I became even more intertwined with our team. As much as my younger brother and I admired the Yankees shortstop, no one became more ensorcelled by Jeter than my mother. She has a shrine to Jeter at her office at work, as well in her computer room at home. Her nickname for him is “Jeter-Butt” because of the way he gets out of the way of an inside fastball (and for a host of other reasons, I’m sure). My older brother made her life when he bought her a picture of Jeter shaking hands with her other favorite baseball hunk, Cal Ripken, who was playing at Yankee Stadium for the last time in his career. No one is allowed to criticize anything Jeter does in her presence…ever. The few times anything negative about Jeter slipped out of my mouth were quickly followed by a backhand to the head.

Former major leaguer Doug Glanville wrote an excellent opinion piece that ran in The New York Times. Glanville says that “numbers tell a story,” and that Jeter’s numbers were hard earned. To get to 3,000 hits, you not only have to be good, you have to be lucky too. Jeter has been relatively injury-free and consistent for so many years, allowing him to “ooze [his] way to greatness.”

Like Glanville, I’ve enjoyed counting Jeter’s hits along the way. I liked watching him collect them when I was smacking Wiffle balls in my backyard, when I was amassing 13 hits in my recreational baseball career, and now, when I’m drinking a beer alone in my apartment in New York.

Jeter will be the player I’ll tell my kids I saw play his whole career. I’ll tell them about the November night he became a hero to my hero.

For the next three games, I’ll live every one of his at-bats like I did when my younger brother was in Little League. Every ball he fouls off, every swing and miss, every groundout will make me jump and sigh with a mix of relief and anticipation for the next at-bat.

Three thousand is a special number. Derek Jeter is a special player, and will remain that way to me even if his batting average drops below the Mendoza line.

He’s earned that incredible feeling that’s going to wash over him when he stands at first base for the 3,000th time. 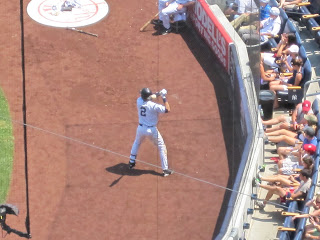