Every Baseball Has A Story

According to MLB.com, a regulation baseball “shall be a sphere formed by yarn wound around a small core of cork, rubber or similar material, covered with two stripes of white horsehide or cowhide, tightly stitched together. It shall weigh not less than five nor more than 5 1/4 ounces avoirdupois and measure not less than nine nor more than 9 1/4 inches in circumference.” It’s hard to believe that something I’ve devoted most of my life loving and obsessing over fits into the palm of my hand. In the words of Roger Angell, “any baseball is beautiful…no other small package comes as close to the ideal in design and utility.” In the spirit of that notion, I took a closer look at some of the baseballs I’ve collected over the years and the memories they brought with them. Every baseball indeed has a story and each one is as special as the one before it. Today I offer three from my collection that are very dear to my heart and serve as reminders of why I love the game as much as I do. 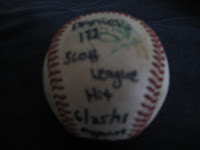 First Hit, June 25th, 1998
Watching baseball as a kid, I always loved how when a player laced his first base hit, the opposing team would flip the ball into his dugout for a keepsake. After not playing Little League and going hitless my first season and a half in Pony League, I figured that I would never be able to have that first hit experience. On a hot summer day in June against the Bees, I came to plate pretty angry after making an error in the field. The pitcher wound up and heaved the ball toward the plate. I remember taking a step and swinging as hard as I could. I made contact and the ball dropped in front of the right fielder. I made the turn around first base for the first time in my life with my legs shaking. I remember feeling like a huge weight had just been lifted off my life. I had something other than a zero in my hit column (not to mention I had pulled the ball for maybe the only time in my career). The best part came after the game. I was waiting patiently for my older brother (who was my coach at this point) to unlock the doors of his baby blue Buick when I saw a ball dart through the air toward me. I caught it easily and looked up at my brother. “Nice hit,” he said simply. I’ve had the ball ever since. 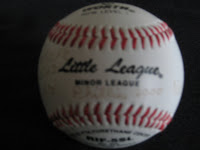 Little League Phillies 2000
I tried my best to be as involved as possible in my younger brother’s Little League career since I never had one of my own. I always helped out his coaches during practice or games from the time he was in tee-ball to his first year in the “majors”. In 2000, I was cut from my high school team after the tryouts and was disillusioned, miserable and desperate to at least remain apart of the game. Luckily, my neighbor had become coach of the Phillies and offered me the chance to be his assistant coach. I said yes without even thinking about it. One of the best parts of the experience, other than watching my younger brother become one hell of a ballplayer, was meeting and coaching a young kid named Chris Collins. He wasn’t the best player and I used to kid him that we could time him running around the bases with a sundial. His smile never wavered, his jokes never seemed to run out (some of which at his own expense and his undying optimism was infectious to every one on the team. Now out of baseball for good, I was proud that there were other players like me out there giving it their best despite not having the skills others possessed. He really proved that baseball is first and foremost a game about heart. It’s nice to be able to check out all the young signatures on this ball and remember those times every now and again. 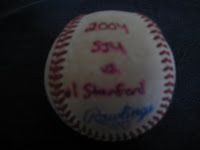 St. John's Red Storm vs. #1 ranked Stanford Cardinal
2004 NCAA Palo Alto Regional
“You’ve been awfully spoiled this year, Danny,” my friend (and former team manager) Derek told me after we found out St. John’s Baseball had been selected to participate in the 2004 NCAA College World Series Tournament. I couldn’t argue with him. Before the season started, I had never been on an airplane, never mind seen the West Coast. Now, with trips to Texas, Arkansas and Notre Dame under my belt, I was headed to beautiful Palo Alto, California to watch my guys play in postseason baseball. My mother had a different reaction when she got the news. She cried. I hadn’t been home in months and with a summer internship in Maine looming, it now looked like I would be away even longer. I remember buying new shorts, washing my lucky polo shirts I had been wearing all year and buying a brand new pair of Oakley sunglasses in the airport to try to look as cool as possible for the televised games. Seeing California for the first time did not disappoint. There wasn’t a cloud in the sky the entire time we were there and the temperature was consistently 80 degrees. Also exciting was the fact that owing to a scheduling fluke, I got my own room at the hotel. I’ll probably never know what it feels like to work in the Major Leagues, but I have to think that this experience came close. We were playing at Sunken Diamond Field, which is one of the prettiest ballparks I’ve ever since at any level.

As the for baseball part of it, we held our own against Long Beach State (a team led by Jered Weaver, who’s now pitching well for the Los Angeles Angels of Anaheim) in Game One, but eventually lost to a bases loaded single in the bottom of the ninth. We beat the UNLV Rebels in our second game, setting us up to play the #1 ranked team in the country to stay alive in the tournament. The Stanford Cardinal were led by John Mayberry Jr., who was a first round draft pick by the Texas Rangers the next year. We started Matt Tosoni, a freshman from Canada who had already beaten Notre Dame on his way to racking up an impressive five wins that season. What we didn’t know then was that he had been battling ulcerative colitis and this would be his last start until 2006. He went six strong innings and was let down by his defense’s five errors. He also gave up a homerun to Mayberry that I think still hasn’t landed. We fought hard all game, but couldn’t find a way to get to Stanford’s freshman pitcher. After the last out was recorded, I realized that it wasn’t only the end of our season, but for some of our seniors, it was their last game in collegiate baseball. I remember looking at our senior shortstop Mike Rozema gazing out at the field with his hands on his hips. He had one of the best pair of hands I’ve ever seen for an infielder and he carried himself with a grace and class off the field that some major leaguers don’t have. I remember his eyes were red as he gathered up his stuff and headed for the bus. I made it a point when we got back to tell him that it had been a real honor to work for him and that I appreciated how nice he had been to me in my rookie year as manager and how hard he played the game. He was drafted by the Atlanta Braves soon after and got all the way through AAA before retiring in 2008.

I found three other major leaguers with the last name Ball (Art, Jeff and Jim), but Neil beat them all out for the spotlight this week. His full name is Cornelius Balland he was born in 1881. Ball played seven seasons as an infielder for the New York Highlanders, Cleveland Naps and Boston Red Sox from 1907 to 1913.

Ball also has the distinction of being the first player in Major League history to turn an unassisted triple play exactly 100 years ago today. He was playing shortstop for the Naps behind Cy Young and there was a line drive hit toward him. There were runners on first and second who were on the move because the Red Sox coach had called for a hit and run. After making a leaping catch, all Ball had to do was step on second and wait to tag out the runner coming from first base.

The glove Ball used and a picture of him with the three men he got out are on display at the National Baseball Hall of Fame. For more details, read this great article written by Ball’s great niece Kathia Miller for Naplesnews.com. You can buy a tee-shirt with Neal Ball’s image on it here. You can also buy an old newspaper from July 19, 1909 with details of the game here.

Summer Reading List:
A Walk in the Woods & Life of Pi

If you’ve never read anything by the travel writer Bill Bryson, A Walk in the Woods is the perfect place to start. In this book, Bryson tackles the 2,100 miles of the Appalachian Trail along with a bumbling overweight sidekick. It is sidesplitting funny and is written in a clear and direct style that makes it perfect to bring along on a vacation or beach day. In between fretting over bear attacks, searching for his wandering companion and navigating hills, mountains and weather, Bryson sheds the spotlight on one of our national treasures and the people that make it so. It’s a wonderful read and will make you want to raid EMS and buy out Trader Joe’s trail mix section and hit the trail!

Life of Pi by Yann Martel is just a beautiful novel. The story about a shipwrecked boy all alone on the open seas with only a tiger as his companion is a remarkable tale of survival at all costs. You can’t help but turn the pages rapidly to see who wins this battle of wits with death as the only consolation prize. The end might have you scratching your head, but in my opinion, only makes the novel all the more memorable and inspiring. Also, the beginning of the novel will give the reader an interesting perspective on zoos and how they fit into our society. This is a couple days read at the most and will leave a lasting impression.