From the Archives:
Summer Poetry

Earlier this morning, I was looking through some old notebooks and folders which hold just about everything I've ever written. In the pages worn by time and age, I came across a few things that seemed appropriate to share on this cloudless, blue sky summer day in New York City. Enjoy!

Summer Legs
The heat of summer brushes off the cold of winter,
standing upon new legs, sturdy and strong.
They’re bumped and bruised from
slips and dives in the tall, green grass.
Their tan tone clashes with the
splashes of mud and dirt,
that threaten the useless bandage out of place.

Summer legs run in and our of trouble,
dodging the buzzing bees and stepping on a
poor ant along the way.
They pause only for a short while
to admire at a newly formed cut or bug bite.
They’re off again at the mere indication
that the game they had abandoned long before
suddenly decided to grab their itchy attention.

The summer sun sets and still
strong and sturdy new legs splash through
the puddles that spring left behind.
Just when the time has come to finally lay them to rest,
a shout fills the humid air,
the mud and ache are long forgotten,
as they sprint away into the setting sun.

At- Bat
That tall terror on the mound
grinds his hand in his glove,
where his pitch of choice is found.

I lean obnoxiously over the plate,
and watch the pitcher’s eyes
go from collected to completely irate.

The pitch barrels into the catcher’s mitt,
as if launched from a World War II tank,
not one I could hit.

Old Blue behind the plate yells,
“Strike Two”, at the next
and the crowd’s boos swell.

My mind fills again,
not with fear or pressure,
but with the smell of franks and pretzels roasting on the grill.

Those who long to see me be king,
hold their breath and gasp,
as the pitch is thrown with some gas
and I take a step and swing!! 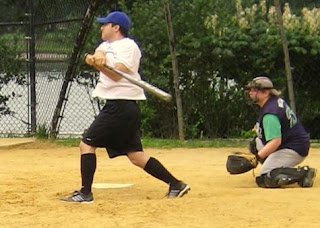 Rain Delay
The field transforms into a labyrinth of puddles,
where ground balls splash their way
into the fielder’s glove.

The players, clad in sweat and mud,
struggle to grasp the slippery sphere,
as raindrops drip off the ends of their caps.

The umpire calls them in a shivering shout,
as he watches the white chalk lines drown
into the base line lagoon.

The day is over.
The game is done without a single pitch thrown,
giving the storm- laden clouds their
rain soaked victory.

A Saturday Morning with Dad
Back and forth
does the rusty blade sway,
sweeping the rest of
the tall grass away.

The mower strays behind me,
with good ol’ Dad,
who wants to do nothing more
than run and flee.

We trudge silently along
with the sound of
the mower and the blade
as our only song.

Our muscles begin to fade
and we pause to
stare out on what
has become the Everglades.

After a stout cough
and a little chat,
we bravely set up our plan of attack
to finish it off. 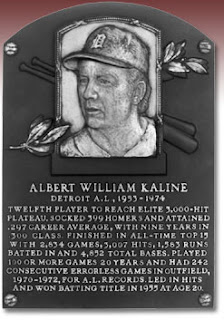 Today’s spotlight centers on one of my dad’s favorite players when he was growing up. Al Kaline was an outfielder for the Detroit Tigers for 22 years and was a 15 time All-Star. John Steinbeck’s East of Eden was recommended to me last summer by Next Magazine’s dining editor Peter Sherwood (whose blog Evenings with Peter is a MUST read). I devoured the novel in short order and it instantly became one of my favorite novels of all time. The story revolves around the lives of the Trask and Hamiliton families set in California. Steinbeck’s beautiful prose not only seamlessly marries the lives of both families, but also assaults your senses with astonishing sights, colors and smells of scenic Salinas Valley. Steinbeck also introduces one of the most depraved, intrinsically evil characters of all time in the person of Cathy Ames. I assure you that this novel does not disappoint and should be in your hands as you sun on the beach with some of Peter’s fella’s Sangria! 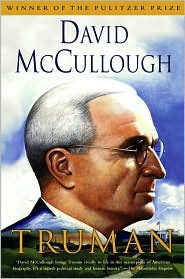 David McCullough is one of the nation’s most celebrated historians and with good reason. Truman is not only a riveting look at my favorite President, but also a masterpiece of historical writing. Highlights include Truman’s decision to drop the first (and only) atomic bombs on Japan, his firing of General Douglas McArthur, his hard fought re-election upset and his lifetime struggle with poverty. There are times in our country where seemingly ordinary men are capitulated in extraordinary situations and Truman proved he was beyond exceptional coming from humble roots. His deep and lasting love for his wife Bess and his irascible personality makes you admire him even more, especially after reading his famous fiery letter to a reviewer who panned his daughter Margaret’s operatic debut. The book is over 1,000 pages long, but I could have easily read thousands more. It's probably not something you want to lug to the beach, but is perfect reading for a cool, lazy summer evening.