I get a little peeved when people, pundits, and politicians say that the country has never been so politically divided or rancorous than it is now.

However, until a member of Congress is caned on the floor of the House or Senate—like Charles Sumner was by Preston Brooks in 1856—then I maintain that we’ve experienced much more harrowing political times. 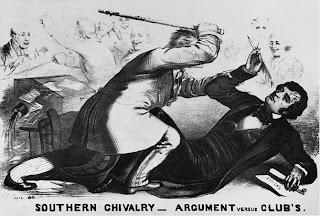 However, it certainly looked like President Obama and Mitt Romney were close to coming to blows in last night’s Presidential debate. It was refreshing to see two politicians who clearly hate each other sparring off in a debate rather than a boring recitation of sound bites (which of course they worked in, but still).

The real winner to me was Candy Crowley, the moderator from CNN. She redeemed journalists after Jim Lehrer’s comatose performance in the first debate. Thanks for making me proud of my degree Ms. Crowley!

I spent the majority of the debate on Twitter trying to keep up with the informed, witty, and inspired banter on my newsfeed. Here are 20 tweets I thought were worth sharing.


"Did I get your name right? Good. Now shut up and fix me a sandwich, woman. Mas rapido!" - What Mitt Romney was thinking
— Charlie Skinner (@iamdrunksam) October 17, 2012


CANDY IF YOU INTERRUPT ME ONE MORE TIME, YOU'RE OUT OF THE BINDER.
— Jay Caspian Kang (@jaycaspiankang) October 17, 2012


I think a degree of blame for the embassy attack belongs to the people who attacked the embassy.
— Paul Carr (@paulcarr) October 17, 2012


So I guess there would be no more gun violence if everyone would just get married (except gays).
— Mark Harris (@MarkHarrisNYC) October 17, 2012


There isn't ONE person in that whole audience that looks like they wouldn't work at the bank. #debates
— Chris D'Elia (@chrisdelia) October 17, 2012


Literally everyone in that audience has to pee.
— Richard Lawson (@rilaws) October 17, 2012


So, basically, these guys flew to New York to talk about China to an audience of Ohio undecideds
— Derek Thompson (@DKThomp) October 17, 2012