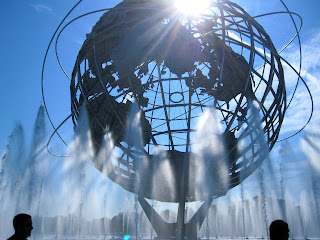 I’ve been defined by many words in my life. I’ve been labeled writer my whole life thanks to my imagination and occasional way with words. Many members of my family would use the words shy, moody, sensitive, and emotional to describe me growing up. I’ve always been attached to the words baseball and student, and probably will be the rest of my days.

However, the past two years have seen another word come to define me like no other has.

I found myself at the start of the 2011 Queens Half Marathon this past Saturday hoping that the label hadn’t left me for dead.

I kicked my legs out in front of me, trying to keep them loose and shake out the nerves. I bent down to tighten the laces of my shoes about a million times. I had my iPod set to Bruce Springsteen’s “Born to Run,” my traditional half marathon leadoff song. I watched the other runners in my starting corral and felt intimidated because most of them had trained infinitely more than I had.

What the hell am I doing standing here?

I hadn’t run in three weeks. I hadn’t had a solid week of running in months. I was out of shape and disillusioned. I had spent the last couple of months watching my life go up in flames. It was self-inflicted, and I had no one to blame but myself. Other than the people I cared the most about, a major casualty of all this was my ability to run. I couldn’t summon up the inspiration or motivation to run through the pain and replace it with blood, sweat, and tears. All I could do was order Chinese food at the end of the day, pass out, and hope the next day would bring me salvation.

I was tired of feeling that way. I could easily have remained in bed with the air conditioner cranking, my spirit broken enough to prevent me from running a race I had so eagerly signed up for months before. I didn’t have to be in Flushing Corona Park in the heat and the humidity at 7 in the morning. But I needed to be here. I needed a jumpstart. I needed to believe that runner wasn’t just a passing fling, but a lifelong definition.

As the crowd around me began to build, my mind wandered back to how the running had started.

I had a horrible hangover after one of my nephew’s birthday parties had gotten out of hand two summers prior. I don’t remember everything I drank, but I knew it was a lot. I had let the bottle attempt to wash away everything weighing on my mind, and like every time before, it failed. My Uncle Jimmy had just passed away, my younger brother was starting basic training in Texas , and my relationship was going through a rough stretch. I was trying to juggle a job and night school, unsure whether all my hard work was ever going to lead me to something meaningful.

I like to tell people that I started running because I’d have a better chance of not getting the crap kicked out of me when the Airman came back home. If I couldn’t withstand a few punches, at least I could have a chance at outrunning him. I promised myself that I wouldn’t have a drink until my brother graduated from basic training. If he was sacrificing, so would I.

I dug up my old running shoes and looked out my window toward Astoria Park. I was the only thing standing in my way.

I could hear my uncle telling me, “This is bullshit!” My mother points out to me often that he’d tell me no one should run that fast or that far without someone chasing you. During those first runs, a lame donkey hauling an 18-wheeler could easily have caught up to me.

My idea of a run at that time was a mile around the track. Nothing more, nothing less. I was lucky enough to have a running partner who pushed me to do more. In fact, she came up with the idea to work toward running the Hartford Half Marathon in October. It was a life-changing suggestion.

Little by little, I kept adding time and distance. I was running an out and back through Astoria Park almost every day. There wasn’t a moment during the day when I wasn’t thinking about the next time I could pull on my running sneakers.

I was alone one steamy night in July, on my way back from Ralph Demarco Park, when I noticed the lights were still on at the track in Astoria Park. I had the legs and the breath to keep going. I remember thinking about what my younger brother was going through in basic. I remember thinking about my uncle. By the time the lights were shut off, I had run seven miles without stopping. I now thought of myself as a runner.

By the time I saw my brother graduate from basic training, I was in the best shape of my life. I remember finding him in the crowd of newly minted Airmen in the sweltering San Antonio heat, eager to share with him everything that I had achieved. We shook hands and embraced tightly. We were both deeply tanned and skinnier than rails. We didn’t have to express many words to show how proud we were of each other. And we knew our uncle had a hand in both of our achievements.
﻿

I ended up finishing my first half marathon in under two hours. I wasted no time in reaching more personal running milestones. I ran a 7.25 minute/mile pace in one of the New York Road Runners’ winter races in 2009, I set a personal record of 1:41 at the 2010 Virgiinia Beach Half Marathon, and twice successfully ran up the hill at West Hartford Reservoir during the 2011 Greater Hartford Quarter Marathon without dying.

I was on a running schedule during the early part of 2011 that saw me running all but a handful of days from February through May. I signed up for a flurry of half marathons (including Providence on Aug. 7 and Hartford on Oct. 15) with the expectation of continuing that plan. As you already know, I took a flamethrower to my life that pretty much killed that idea.

But, here I stood at the start of the Queens Half, ready to become a runner once more.

Everything left my mind once the national anthem ended. All the memories, all the pain, all the crap took a backseat. I was now only thinking about the 13.1 miles of pavement ahead of me. I wasn’t hot, I wasn’t worried, and I wasn’t scared. My legs no longer felt nervous; they felt eager to prove there was no distance they couldn’t run. The fire was burning inside me, that primal place within me that I thought was unreachable the past few months, instead of burning down everything around me.

Only one word thundered in my head as I heard the starting gun.

There are four players in Major League Baseball history who have some variation of “speed” in their names. However, only one of them played for more than three years.

Speed Martin pitched in six seasons for the St. Louis Browns and Chicago Cubs from 1917 to 1922.

He had his best season in 1921 for the Cubs. He won 11 games, completed 13 games, and pitched 217.1 innings. However, he also lost 15 games and only struck out 86 batters. His ERA was 4.35, but that was good enough for second-best on a Cubs team that only won 64 games and finished seventh in the National League that year.

Horace Speed played three seasons as an outfielder for the San Francisco Giants and Cleveland Indians from 1975 to 1979 (he did not play 1977¬¬–1987).

Speed Kelly played 17 games as an infielder for the Washington Senators in 1909. He managed just six hits in 42 at-bats, one RBI, one stolen base, and 15 strikeouts.

And who can forget the joyously named Speed Walker? He played in only two games as a first baseman for the St. Louis Cardinals in 1923. Walker had two hits in seven plate appearances. He scored one run.

Also, check out this great article in Runner’s World magazine about a relief pitcher for the St. Louis Cardinals who ran a marathon inspired by his six-year-old daughter with a rare chromosomal disorder.