If you haven’t realized by now, I’ve been extremely spoiled in my life when it comes to baseball. However, at no point in my life was I spoiled more than in the summer of 2004. St. John’s pitching coach Scott Brown offered me a summer internship with the Sanford Mainers, a team he coached in the New England Collegiate Baseball League(NECBL) and I said yes without thinking twice. Days after St. John’s Baseball had been eliminated from the NCAA Tournament in Stanford; I was on my way to Sanford, Maine to become the Mainers’ Media Relations Intern. I was lucky enough to meet one of the best baseball men I’ve ever known. Neil Olson, the team’s general manager, took me under his wing and taught me even more about the game that I love. The summer wouldn’t have been the same without him and winning the championship was all the more sweeter seeing how much it meant to Neil. He was kind enough to spend some time answering my questions while in pursuit of championship number three. 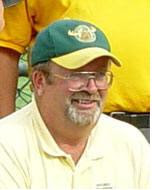 Dan: I would be remiss not to start off by asking you about the baseball camp you attended run by Ted Williams. Tell me about your experiences and what affect they had on your baseball life.

Neil: At an early age, I attended Ted William’s camp for 13, 14 and 15 year olds. We had a core group of about 15 kids who just simply loved to play the game of baseball. The camp played quite a few Jimmy Fund games in various parts of the country. We had an absolute blast.

The camp also had a team in the Twilight League. New Bedford, Massachusetts and Tiverton, Rhode Island also had teams. We were playing against men much older. We held our own as two of out pitchers on our team would later pitch in the big leagues; Joe Coleman Sr. and Stan Thomas.

Ted Williams had been retired about five years when I first came to the camp. He actively attended the camp and enjoyed watching Jimmy Fund games as he could sense out love for the game. One particular Jimmy Fund game Joan Joyce, the famous softball pitcher pitched to both Dom DiMaggio and Williams. She let DiMaggio get a hit, but not Williams. She blew him away. He spent time in our dugout that night and you could feel his competitive spirit. He was pissed. (The opposing pitcher in that game night was Dave Wallace. He later was my teammate at New Haven College and after a brief major league career as a pitcher he became a general manager for the Dodgers and pitching coach for the Red Sox).

Williams only wanted to be a regular guy and became annoyed when drulled on for his autograph. I observed him having a gold ole boy conversation with my father one game and that’s a great memory. Williams was the last true American hero. He fought two wars and didn’t complain. John Wayne spent his whole life trying to play Ted Williams.

Dan: What got you into baseball originally? What did the game mean to you growing up?

Neil: I got into baseball after hearing some kids talk about the game. I became obsessed with batting rocks all day. I would practice ground balls in the basement all winter. It gave me a reason for being.

Dan: What kind of player were you? After watching you take some batting practice during my time in Maine, it looked like you had a really good swing and could hit the ball well.

Neil: I was a very good contact hitter! I had a good glove and came to play every night. My down fall was speed. Basically, I had none. I made the All-Star Team in a Valley Summer Wooden Bat League and led my college team in hitting two different years. I took batting practice once at R.F.K. Stadium with the Washington Senators. You guessed it; Ted Williams was their coach.

Dan: You’re now a hall of fame trapper. How did you get started trapping and were there any qualities that you possessed on the baseball field that helped you in the woods?

Neil: I got into trapping when I was just a kid. The competition is similar to baseball. It’s you against the animal you’re after. In baseball, it’s the batter against the pitcher. It’s all about the competition.

Dan: I know you keep stats on everything that you trap. What do you think is your most impressive or favorite statistic?

Dan: You published a few books on trapping as well. What’s one of your favorite trapping stories?

Neil: Trapping canines in a beautiful back pasture in Colebrook, New Hampshire one fall day turned out to be a real ego buster. Colebrook has what I call ideal coyote habitat. Plenty of small game and some back pastures, big by England standards. These pastures have coyotes written all over them. This area was one of the first to have large populations of coyotes. Driving into one of these back pastures, I could see I had captured a coyote. I drove over the rise on the further end to have a look.

I stopped my truck on the top of the steep rise and walked down to dispatch my catch. Having a camera hooked to my belt, I said to myself, “What a great picture!” I snapped a picture making sure to get my truck setting on top of the knoll. Having done this I removed my revolver and dispatched the coyote. The second I pulled the trigger, I heard a noise behind me.

I turned around and in sheer horror, watched my truck roll down the knoll. When it came to the edge of the woods, it snapped off a six-inch fur tree like it wasn’t even there. Luckily, a large grey birch bent out at about a 45 degree angle was next. My truck slammed into it, driving the hood and radiator back. If the birch hadn’t been there, it would have plunged into a deep ravine and probably would still be there.

I went from the great white hunter into an idiot in a split second. I had failed to put the truck in park correctly. A tow truck was needed and my day was ruined, or smashed I should say.

Dan: How did you get involved in the Mainers?

Neil: I was looking for a way to give back to the game and this was my way of doing it. I was lucky that the commissioner of the NECBL got involved with Sanford.

Dan: You and I did a couple games for the local television station when I was up there in 2004. I also rode with you in the Sanford Mainers mobile during a Fourth of July parade. I can recall numerous baseball chats we had during long road games. I was wondering what were some of your favorite memories from that summer and what made that championship year so special.

Neil: Memories are always enhanced by winning! Both Scott and Joe (Mainers head coach in 2008) Brown had the desire to win. I learned a lot from both of them. It became us against the rest of the league and we prevailed.

Doing the commentary during those televised games with you was very special because not everyone has the chance to do something like that. I think we did a very job together. 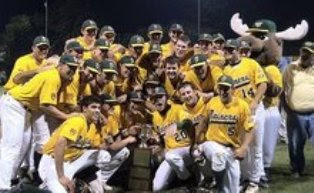 Dan: How do you find time to run your own business, work with the Mainers and spend time with your family?

Neil: Scheduling is tough, but you make it happen if you want it enough.

Dan: You actually won your second championship last year. What was that experience like and how was it different from 2004?

Neil: Two championships in five years is pretty darn good in our league. Last year had a lot in common with 2004 since both Browns knew how to show players how to win (I call it Brownie points). The most talented teams don’t always win; it’s the teams that want it most that do.

The best series I’ve ever been involved with was a semi-final series against the Vermont Mountaineers in 2007. We lost in three games, but every game was decided on the last play of the game. The intensity was amazing. 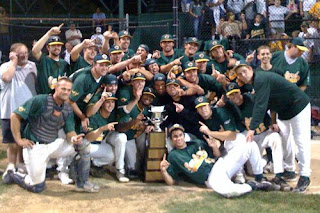 Dan: I hear that you’re coaching third base now. What has that experience been like? You’re grandsons are playing now and I was wondering what its like to watch the next generation.

Neil: Being on the same field with my grandsons and watching them achieve is very, very rewarding! Because their father built his own field and Frozen Ropes indoor facility, they have played more baseball than any other kid their age in Maine. Stay tuned and remember their names: Garrett, Connor and Griffin Aube!

Dan: Last question: Honestly, on a scale of one to ten, how would you rank me as a worker putting up tents?