In honor of Father’s Day, I delved into the stats of some famous baseball fathers. Check back later in the week for a longer post about my short lived playing career. Enjoy your Sunday and cheers to the best father a guy could have! 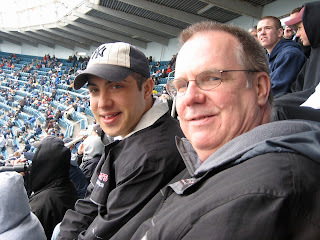 Jose Cruz spent 19 seasons in the majors between 1970 and 1988, mostly with the Houston Astros.

He ended his career with an impressive 332 homeruns and 1,024 RBI. Less impressive are his 1,757 strikeouts, good for 11th most all-time.

After bouncing around four teams the last years of his career, Boone finished with a .275 batting average 151 homeruns and 737 RBI.

Mel Stottlemyre played 11 seasons between 1964 and 1974, all pitching for the New York Yankees.

Vern Law played in 16 seasons between 1950 and 1967, all pitching for the Pittsburgh Pirates.

His best season came in 1960. He won the Cy Young Award after winning 20 games with an E.R.A. of 3.08. He completed 18 games and tossed three shutouts. More importantly, he won two games against the Yankees in the World Series. The Pirates upset the Yanks that year after Bill Mazeroski’s walk-off Game Seven homerun (sorry Dad).

Thorton Lee played in 16 seasons between 1933 and 1948, mostly with the Chicago White Sox.