Brothers, Baseball, and Beer: The Art of Playing Catch 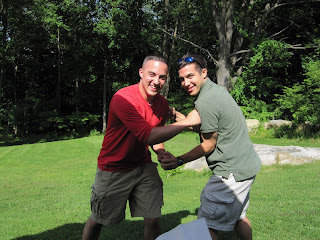 The search began as soon as the day started to break toward spring.

The porch, the shed, the cellar, and my parents’ cars turned up nothing. I scanned the front and back yards cautiously. I didn’t want to discover that its final resting place ended up being a soggy piece of lawn recently buried under two feet of ice and snow. I came up empty no matter where I looked. I took a slug of my beer dejectedly. I was ready to concede defeat and suffer through yet another weekend without a sacred early spring ritual.

That’s when my eyes fixated on my younger brother Pat’s closet door. I was fairly certain that he had thoroughly investigated it, but with no other options left, I decided to check his work.

My faith in my brother was rewarded. There was nothing baseball related in plain sight. However, I noticed a duffle bag that I didn’t recognize. Always open to “borrowing” a forgotten pair of sneakers or workout shorts, I decided to keep digging. As soon as I moved a pile of clothes out of the way, Pat’s stupidity was reaffirmed.

The missing black Rawlings baseball glove was staring right at me.

I slid my hand into the soft leather glove. Any frustration I might have felt melted away as soon as I opened it and hammered my right fist into my opposite palm. I rushed to pick up the baseball I had abandoned in despair. When the ball was safely nestled in the webbing of the glove, I fired off a text message to Pat

The Ford brothers didn’t always play catch in the middle of the street. My earliest recollections have us tossing the ball around in our backyard. The grass always seemed to be perfectly mowed, well-worn dirt patches surrounded our plastic bases, and our neighbors’ fences ensured that our bad throws would end up a manageable distance away from us. Whether playing a heated Wiffle ball game or getting smacked in the head with one of our father’s throws, our backyard was a baseball paradise for a kid.

Maybe we decided to move after I sailed a ball over Pat’s head that ended up smashing the glass window on my father’s grill. It could have been the other throw that I unleashed that violently took off the top of one of the wooden fence posts separating our yards. It could also have been because we were tired of losing baseballs in our death-defying patch of poison ivy and then contracting a rash going in after them. Pat sent me a message the other day that put our flight from the backyard into perfect perspective: “It was a swamp until June and it was full of dog shit.”

Obviously, a new home was necessary.

We tried the driveway first. This was short lived because one of us failed to get a glove on a baseball that put a hole in my father’s taillight. We couldn’t long toss in then front lawn because there wasn’t enough room and we didn’t want to chance destroying our neighbor Jimmy’s prized vintage Buick. According to my older brother Tom, the street had everything we were looking for; convenience, fewer obstacles, reduced chance of damages, and more space to air it out. The street became our refuge and we wasted no time in creating memories we could actually remember.

Since our street is on a slight hill, I was quickly banned from throwing downhill. I developed a case of the yips for a couple of months and everyone, myself included, was tired of having to run to prevent the baseball from going into the woods or sewer after every errant throw. If I forgot my softball glove in New York, I usually ended up being the brother who was stuck with the inadequate-in-every-way catcher’s mitt. I might as well be playing catch with a tiny Latex glove.

On day, my brother Tom pulled up to the house, got out of his car with his glove on, and ran out to join me and Pat who had been throwing for a while. Tom’s wife Kristen had been inside, waiting for him to take her to lunch. And here he was ready to play ball with us. Good thing she wasn’t pregnant at this point (oh wait….). After throwing the ball around for a good 15 minutes, Kristen poked her head out the front door and admonished Tom for making her wait. Tom’s defense was that he had just gotten there. Pat looked at him after Kristen slammed the door and said, “I don’t think she bought. It might be because you’re sweating profusely.”

Our best days came early in the spring. All we did Easter weekend was drink beer, throw a baseball around, and eat. We’d throw for a bit, drink half a beer, throw a little bit more, finish a beer, throw, run to get refills, throw some more, etc. etc. This all occurred on the street and in our front yard. The only thing missing from our redneck tableau was a matching set of lawn chair furniture and a car up on cinder blocks. The only break we took was during Easter brunch, after which we continued to throw our arms out and sneak beers to Tom without Kristen knowing. Later that night we ended up scarfing down the leftovers from the cookout the night before as if we hadn’t eaten anything all day. My father complained later on that he looked like an alcoholic when he dragged three full trash bags of empty beer bottles to the Lions Club.

This past Sunday found Pat and I right back where we belonged. We had all the essentials we needed, except for one (in reality two, counting Tom)—beer. Pat had fought his instinct to buy anything near his Air Force base in Massachusetts, failing to remember you couldn’t buy liquor in Connecticut on Sundays. Undeterred, we dusted off our father’s bottle of Bombay Sapphire Gin and made gin and tonics. I have to say, our pint glasses really classed things up.

The rhythms of the catch were unchanged. There was the same inkling of soreness in our arms after the first ball was thrown, the frequent stopping to let cars go by, and the constant putdowns and slams we lovingly hurled at each other along with every baseball. The seams of the ball tore at our soft, winter fingertips, and the bright, unscarred baseball tore through the air with the familiar machine gun sound.

One thing stood out to me on that cool Sunday afternoon. Pat was dressed in his military uniform having come right from work. It was a clear sign of how time had changed him, changed the entire family really, and how precious these moments with each other truly were. I found out later that he was being shipped to some of the more unsavory parts of the world for a training mission. I shook his hand and hugged him good bye, told him to stay in the wire over there, and that I’d be right there waiting for him with a beer when he got back.

He won’t have to look very far for his glove this time either.

My buddy Chris and I bought $5 tickets to go see the Yankees last week. It was his first time at the new Yankee Stadium, which meant the baseball gods conspired to rain out the game. We still managed to have a good time by spending $50 on food and waiting 15 minutes just to see a guy being carted off on a stretcher after police halted traffic on the ramp leading to the upper deck. We actually could have left the scene at any time, but stayed thinking someone important might be strolling by, like the time Henry Kissinger and Beyoncé walked past me during Game One of the 2004 American League Championship Series. Nope, this time it was just some random unconscious guy.

The highlight of the evening was visiting the Yankees Museum. Even if there had been a game, and even if the Yankees had won, it still might have been the highlight since Chris and I are both Yankees homers and huge history nerds. Along with old jerseys, bats, championship rings, and World Series trophies, the museum included a display of baseballs signed by anyone who had been affiliated with the team. We giggled over seeing our favorite players and reacted with horror after seeing a baseball with Suzyn Waldman’s name proudly displayed. One of the ushers told a mildly disappointed Chris when he told him Mel Hall was too busy banging out license plates to sign baseballs. Well, that and FedEx doesn’t exactly deliver to those serving a 45-year prison sentence.

The reason for bringing this up, other than to continue our running Mel Hall joke, is to highlight a player that caught Chris’s attention because he shares the same nickname.

Chandler made his debut in 1937 and played his entire 11-year career with the New York Yankees. His breakout year came in 1943, in which he won 20 games, had a winning percentage of .833, pitched 20 complete games, had an E.R.A of 1.64, and won the American League’s Most Valuable Player Award. He would retire in 1947 with the best winning percentage of any pitcher with over 100 career wins (.717).

Chandler served in the U.S. Army during World War II from April 1944 to September 1945. He was not assigned to active duty because of his age and injuries to his arm. Like many baseball greats, Chandler missed out on two years during the prime of his career. However, he did not complain and is quoted in a 1993 issue of Baseball Digest as saying, “I came back. Some of those boys didn’t.” When he did come back to the league full time in 1946, he would win 20 games and post an E.R.A. of 2.19.

For more information on Spud Chandler, as well as other information about baseball players who served during World War II, I encourage you to visit Gary Bedingfield’s Baseball in Wartime. The website includes player biographies, memorials for those players who died during the conflict, details on service teams and games, and photo galleries. The author also maintains a blog, which can be found here.

April is military child month. The Army will be sponsoring activities at installations around the world to recognize the sacrifice of military children. According to the U.S. Army, more than 1.7 million kids have one or more parents actively serving in the armed forces, with an estimated 900,000 children who have had one or more parents deploy multiple times. To learn more, click here.
Posted by Daniel Ford at 7:02 AM
Email ThisBlogThis!Share to TwitterShare to FacebookShare to Pinterest
Labels: Baseball in Wartime, Beyoncé, Bombay Sapphire Gin, Buick, FedEx, Henry Kissinger, New York Yankees, Spud Chandler, Suzyn Waldman, World War II